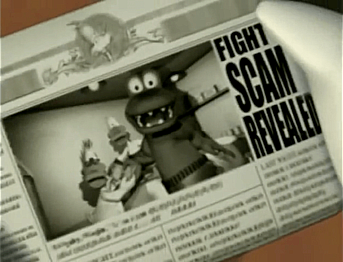 The look on their face says it all.
Advertisement:

Two characters, or two factions (or occasionally more), try to fake a fight between each other. Either a third party or circumstance set them up (especially in an Involuntary Battle to the Death), or they need to make the other see that they're fighting, either for PR reasons or to distract them from something else, etc.

Maybe one or both of the them don't actually want to fight at all (either they're pacifistic, or one of them likes the other too much, etc) or one is so outmatched that there is no chance of them making it out alive.

To the people watching the moment, it looks like they really are fighting as they cheer for one of the fighters to succeed. That being said, there are times when the two fighter end up being pretty obvious that they are acting, yet their audience still ends up buying it. In a few of these staged battles (but not all of them), the two have a designated victor for their fight while the other takes the fall.

Whatever the reason, the fight is faked for the benefit of one or both of the people involved. However, there are also moments where their staged fight will accidentally break out into a real fight (such as when one of them hits the other too hard, or one of them didn't realize it's meant to be fake), or even reveal to have been a real fight all along. When this happens, one or both characters may find themselves in a panic over the fact that they have to start fighting for real.

When it comes to live-action media, practically all fights are faked for entertainment. However, for a battle to count as this trope, it has to actually be acknowledged in-universe to have been staged by the two fighters.

See also Monster Protection Racket. Not to be confused with Let's You and Him Fight.