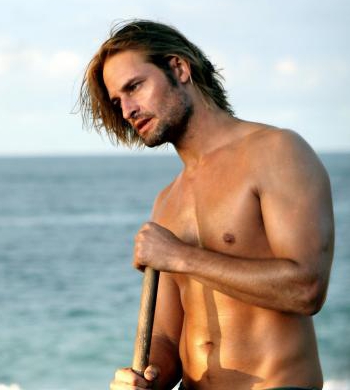 So, you thought fanservice was only targeted towards straight men?

A hunky man (real or animated) goes shirtless (or completely nude) or wears a revealing top that shows off his pectorals (in a sort of Spear Counterpart to Absolute Cleavage). Saves the crew a fortune in wardrobe (or ink) for Mr. Fanservice.

A less fleshy version of this would be his wearing a t-shirt pulled back over the back of his head or his leaving the shirt totally unbuttoned. Also a practice of slender Bishōnen in Japanese media. Western shows may play around with this by having the female characters ogle the "pool boy".

Despite applying mostly to young, hairless types such as Bishonens, some men will occasionally sport a Carpet of Virility. Of course, their pants will always stay on. (Well, almost always...)

"Beefcake" poses for male performers probably date as far back in human history as skimpy outfits for female performers. One of the standard props of certain kinds of "Strongman" performers in circuses and such is a "tear-away" shirt that can be pulled off during a performance and then easily sewn back together in between shows.

This type of gratuitous semi-nudity is also called a Shirtless Jackman Scene, named after muscular Australian actor Hugh Jackman whose film contracts allegedly contain a clause that demands the presence of at least one shirtless scene, even when the plot does not require it. It's not proven, but the majority of the films he has appeared in are strong evidence. Legend has it that some people are not able to recognize him with his shirt on, and X-Men (2000) established him as the pioneer of the current generation of topless male actors.

This trope is among the Always Male tropes because... well, you know. The closest female equivalent would usually be a Lingerie Scene, Bare Your Midriff, or a Swimsuit Scene. Or, if it's more important to have a female character shirtless In-Universe but not necessarily to show everything to the viewers, then of course the answer is Toplessness from the Back and/or Shoulders-Up Nudity.

See also Shower of Angst, Slipknot Ponytail, Final Battle-Induced Shirt Loss, Man in a Kilt, Sexy Soaked Shirt, Forging Scene, Shirtless Captives, After Action Patch Up, Intimate Open Shirt, Lingerie Scene and Distracted by the Sexy.note  As a rule, in such a work, female characters will only pay attention to the shirtless guys with slim figures and built up muscles and ignore the guys who are fully clothed. If the character's everyday attire is conspicuously lacking a shirt, he would be a Walking Shirtless Scene.