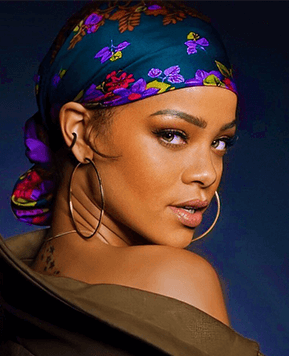 Influences:
"When the sun shines we'll shine together
Told you I'll be here forever
Said I'll always be a friend
Took an oath I'ma stick it out till the end
Now that it's raining more than ever
Know that we'll still have each other
You can stand under my umbrella"
— Rihanna, "Umbrella"
Advertisement:

Robyn Rihanna Fenty (born February 20, 1988) is a popular singer who hails from Saint Michael, Barbados, although her mother was from Guyana. Discovered by Jay-Z, she gained fame in the music industry via her first single, "Pon de Replay".

Her third album, Good Girl Gone Bad, is considered her breakout album, containing what many would call her Signature Song, "Umbrella".note Or else, as lots of people pointed out to the BBC, a completely irritating and ever-present Ear Worm. She did sheepishly appologise to people who coundn't get the damn thing out of their heads, however. However, what catapulted her into mainstream worldwide focus was when she was physically assaulted by her then boyfriend, R&B singer Chris Brown, in February of 2009. The incident seemed to have changed her once upbeat and pop-laden image, as her more recent works, as well as her appearance, have become almost blatantly Darker and Edgier. Even her happy, upbeat songs have an edge to them that didn't happen by coincidence...

She has released an astounding seven albums in twelve years leaving her in the public eye at all times in some form thanks to annual releases from 2005 to 2012. Also thanks to that, she quickly skyrocketed to become one of the most successful singers ever. Less than 10 years since her first album was released, she had already sold over 150 million records.

In the 2010s, Rihanna branched out into business endeavors under the brand Fenty. These include a cosmetics line (Fenty Beauty), an underwear line (Savage x Fenty), and a fashion line (Fenty). In January 2022, she announced that she is pregnant with A$AP Rocky's child.