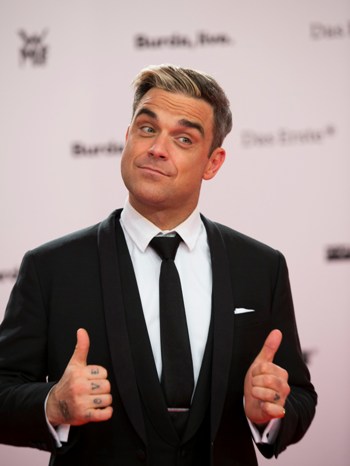 "So come on, let me entertain you!"
Advertisement:

Robert Peter "Robbie" Williams (born 13 February 1974) is a British pop singer, former boy-bander and one-man entertainment machine, known for songs such as "Angels", "Let Me Entertain You" and "Rock DJ", and a fascination with the supernatural. Formerly of the incredibly popular '90s UK Boy Band Take That, he has found a way to a successful and long solo career.

Having successful auditioned for Take That aged just 16, Williams rose to fame as the "cheeky chappie", exuberant dancer and occasional lead vocalist in the band's first run in the early- to mid-1990s. After many disagreements with the management and group members, Williams left the group in 1995 to launch his solo career — Take That would soldier on as a four-piece without him at first but split the following year.

Unlike many people who'd been in boy bands, Williams had a keen interest in rock music, particularly Britpop inspired by Oasis, and worked with songwriter and producer Guy Chambers to create credible songs in this style, starting with the album Life Thru A Lens. Despite this, diminishing returns for his first few singles saw Williams' solo career looking almost dead in the water by late 1997 — at which point, however, he had a stunning breakthrough success with the ballad "Angels", which was released almost as a last resort but single-handedly salvaged him, becoming an instant classic. The Glam Rock inspired "Let Me Entertain You" followed a few months later, was another big hit, and Robbie was set.

His second album I've Been Expecting You came out with a similar style to the first album but considerably more experimentation and a slightly more mature image. His third album, 2000's Sing When You're Winning set the standard for even bigger commercial success. At this stage he was so all-conquering it was swiftly followed to the top of the charts and massive sales by a companion album of big band covers, Swing When You're Winning, and performances in front of hundreds of thousands at vast outdoors gigs at Knebworth House in 2003.

2004's first Greatest Hits Album produced his sixth UK Number One single, but things gradually slipped from this high plateau in the following years, as some less well-received music was coupled with the odd bit of 'personal difficulties' from the often wayward star. Strangely too, after years in which Williams had far eclipsed his former bandmates, he found himself unexpectedly outshone by the other members of Take That after the four got the group back together (still without him) in 2006. On 15 July 2010 however, it was announced that Robbie too had rejoined Take That and that the group intended to release a new album as a five-piece that November. Progress eventually became the second fastest-selling album in UK chart history and the fastest-selling record of the century so far. Williams shortly returned to his solo career and hit the top of the singles charts for the first time in several years with 2012's "Candy", and had his 10th UK Number One album with Take The Crown. A belated second chart-topping swing album followed the next year. He bowed out from Take That for a second time in 2014 due to the birth of his second child, but amicably this time and both he and the band have said he may rejoin at an unspecified future date.

Williams has sold over 75 million records worldwide, which ranks him among the best-selling music artists worldwide. He is the best-selling British solo artist in the UK and the best selling non-Latino artist in Latin America. Six of his albums are among the top 100 biggest-selling albums in the UK. His December 2019 return to the top of the charts with festive album The Christmas Present marked yet another milestone, as it tied Elvis Presley's record of 13 UK Number One albums (and from just 15 releases): the most ever for a solo artist, with only The Beatles' total of 15 higher for any act in history. He has also been honoured with eighteen BRIT Awards — more than any other artist — and seven ECHO Awards. In 2004, he was inducted into the UK Music Hall of Fame after being voted as the "Greatest Artist of the 1990s." He ended at #77 in 100 Greatest Britons.

Robbie is married to actress Ayda Field, and they have four young children. Together, Williams and Field became judges on the 2018 series of The X Factor, a move that was highly criticized by the public due to Field not having proper experience in the music industry.

Not to be confused with the late Robin Williams.