You Can Leave Your Hat On 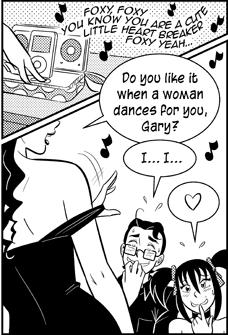 Yes, and he's not the only one.
Advertisement:

A striptease. On screen, depending on the tastefulness of the scene, the point in their career and the quality of the movie, it can either make or destroy an actor or actress.

Because someone disrobing on camera has a tendency to do that. Can go all the way; use of Scenery Censor and other camera hiding techniques is optional; may be played for comedy or pure weapons-grade Fanservice.

In the days of VHS rentals, this could cause technical difficulties, as that small section of the tape would get an inordinate amount of wear.

Many scenes like this (especially those that take place in clubs) have the stripper perform to music with a costume (initially) and whatever props the situation calls for.

The trope name comes from the 1972 song "(You Can) Leave Your Hat On" by Randy Newman. Sung by Joe Cocker in the movie 9½ Weeks, as well as covered by other singers. Made popular again by Tom Jones's version in The Full Monty. Made ridiculous by Troll 2.

If an unwilling subject is forced to disrobe, it falls rather under Shameful Strip.

See also Best Known for the Fanservice, Strip Poker. Has nothing to do with Please Keep Your Hat On, despite being extremely similar in name. A Shameless Fanservice Girl will have no problem doing this any chance she can.