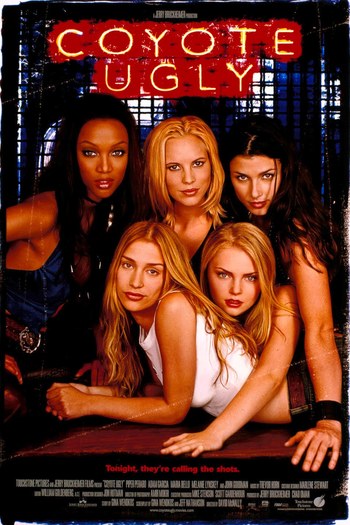 For some, this poster is as good as it gets...
Jerry Bruckheimer: "So, let me get this straight: This script is about a strip club where the four employees don't take off their clothes. And they're too busy dancing —completely dressed— on top of the bar to serve anyone a drink. Yet the bar is so popular that there's a giant line to get in. I sent the script to the people who wrote Gilligan's Island and they sent it back with a note that said 'This is preposterous!'"
— Seanbaby, hanging a lampshade on the film as only he can.
Advertisement:

Coyote Ugly is a 2000 comedy-drama produced by Jerry Bruckheimer and directed by David McNally about songwriter Violet Sanford (Piper Perabo), who moves to New York City to try to make it big with her music. She ends up getting a job at the eponymous woman-run bar, which prominently features scantily-clad bar-dancers teasing the male patrons. She eventually comes out of her shell with the help of her Australian boyfriend (Adam Garcia) and the girls at Coyote Ugly.

Best remembered for its Cult Soundtrack (which featured the crossover LeAnn Rimes hit "Can't Fight the Moonlight") and its bait-and-switch trailer (which led viewers to believe the movie would be 90 minutes of T&A and sexy adventures; the actual movie is a Chick Flick through and through).