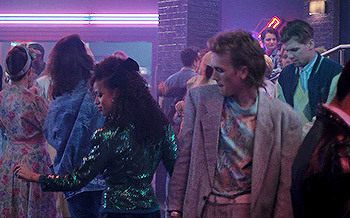 Nightclubs in fiction are always much cooler, bigger, and cleaner than the ones you find in the downtown of your town (unless your town happens to be New York City, Atlanta, Tokyo, Berlin, Ibiza or London). Expect to see a line around the block to get in whether the club is full or not, though some people need only wink at the Bouncer or have a spot on the guest list and in they go (this seldom includes the main protagonist unless they're a sexy woman). And, as with the High-School Dance, expect everybody in attendance to be dancing around and having a great time (whereas, in Real Life, you're likely to see a lot of Mood Dissonance among the attendees and more than a few people who just want to go home). There might even be Dancing Royalty clearing the dance-floor with their amazing dance moves or leading a Flash Mob-esque dance sequence.

Clubs in fiction also seem to be packed no matter what night of the week it is, and the bouncers seem to have no problem letting teenagers in the front doors (again, except the main characters). Furthermore, everyone of relevance to the plot will hang out at the same one. Despite the crowds, you can hold an extended conversation in a normal speaking voice and have no problem being heard.

Often a Bad-Guy Bar and rarely a Good-Guy Bar, because Evil Is Cool - always remember that Vampires Own Night Clubs.

See also Where Everybody Knows Your Flame, for the gay version. The Wacky Startup Workplace often tries to evoke a fun, club-like atmosphere.

For cool "clubs" in the other sense of the word, see Carry a Big Stick.

Dimitri's Nightclub is the center of his forging operation.

Dimitri's Nightclub is the center of his forging operation.