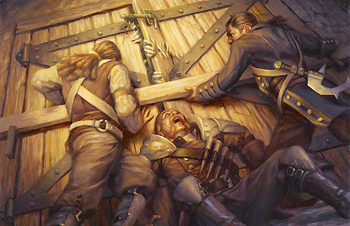 They are coming...
"You and I, Sam, are still stuck in the worst places of the story, and it is all too likely that some will say at this point: 'Shut the book now, dad; we don't want to read any more.'"
— Frodo, The Lord of the Rings, The Two Towers, Book IV
Advertisement:

This is it. Things really can't get any worse. They just can't.

During the course of a Story Arc, your characters can go places, have adventures, fight bad guys, and right wrongs. They've loved and lost and learned... and then something happens. Something that they never expected. The Bad Guy Wins. The people turn against them. The mentor is dead. The team falls apart. The Hero Dies. The last slice of pizza gets taken.

And they don't have time to mourn or plan or get over their losses, because more bad things are happening. This is the point in a narrative when there's no hope, when the characters are at the edge of the Despair Event Horizon. It is frequently invoked for the strongest testing of The Hero's character: What You Are in the Dark.

Older Than Dirt, going back to The Epic of Gilgamesh. As an ancient and ubiquitous plot device, this scenario has received quite a bit of attention in literary circles; it's cognate to the "death" stage (preceding the "descent into the underworld", but not always clearly distinguished from it) in certain formulations of The Hero's Journey monomyth, and shows up elsewhere as well. At least one creative writing course views such bleak moments as essential to effective plotting.

This usually precedes a Day of Reckoning climax where only a few things can happen:

Compare Can't Refuse the Call Anymore, the first of the dark hours. May overlap with Near-Villain Victory. The Cornered Rattle Snake is someone who begins to fight back despite appearing to have no chance of survival. Hope Springs Eternal is the natural conclusion of such a moment... unless, of course, the story features a Downer Ending.

The Trope Namer is a proverb that claims that "The darkest hour is just before the dawn," but its exact origins are uncertain. Most likely, English theologian and historian Thomas Fuller was the first one to say something like it in his 1650 religious travelogue A Pisgah-Sight Of Palestine And The Confines Thereof, where it is quoted, "It is always darkest just before the Day dawneth."

It should go without saying, but "Here there be spoilers!"

Remember, dear tropers; the darkest hour is always before the dawn.

Thanks to Felix's machinations, Gabriel manages to acquire every Miraculous from the box barring the Ladybug, Black Cat, and Peacock Miraculous, bringing him one step closer to achieving his goal. And while Marinette falls into despair over her failure as a guardian, Adrien reassures her that their fight against Hawk Moth is still far from over...

Thanks to Felix's machinations, Gabriel manages to acquire every Miraculous from the box barring the Ladybug, Black Cat, and Peacock Miraculous, bringing him one step closer to achieving his goal. And while Marinette falls into despair over her failure as a guardian, Adrien reassures her that their fight against Hawk Moth is still far from over...