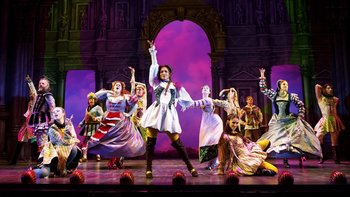 They got the Beat!

Head Over Heels is a Jukebox Musical loosely based on Sir Philip Sidney's Arcadia combined with with the music of The Go-Go's. It tells the story of the royal family of Arcadia, King Basilius, Queen Gynecia, and their daughters Pamela and Philoclea. Problems are arising due to the daughter's love lives; Pamela refuses to marry any of her suitors, and Philoclea only has eyes on her childhood friend Musidorus, a penniless shepherd. Prophecies from the mysterious oracle Pythio lead Basilius to take his family on a journey away from their home, but as Pamela's handmaid Mopsa says, "a man can find his destiny on the way he takes to avoid it."

The show flopped on Broadway due to the odd pairing of Elizabethan language and 80s pop music, but the Cast Full of Gay caused it to develop a cult fanbase. The original cast featured Jeremy Kushnier as Basilius, Rachel York as Gynecia, Bonnie Milligan as Pamela, Alexandra Socha as Philoclea, Andrew Durand as Musidorus, Taylor Iman Jones as Mopsa, Tom Alan Robbins as Dametas, and Peppermint as Pythio.