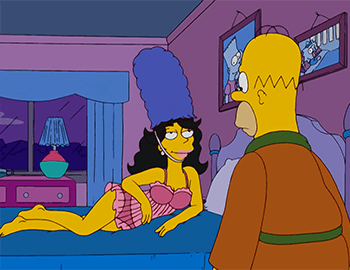 "Marge, you look different... New haircut?"
Susan: Oh Reed, that sex was wonderful.
Reed: Was it, hehe— [morphs] Surprise! I was really a Skrull all along, baby!
Susan: [morphs] FRANK!
— Twisted Toyfare Theatre spoof of the Fantastic Four
Advertisement:

A trope in which Carol has sex with Bob by pretending to be Alice. In short, "My God, Who Have I Done?"

In the classic version which gave this trope its name, Carol accomplishes her coup by slipping into bed with Bob after dark; Bob is typically too sleepy to notice the difference. This can be justified in cases where Bob and Alice have never slept together before, but if Bob and Alice are married it strains the audience's Willing Suspension of Disbelief (he can't tell the difference between Carol and his wife of five years?). Historically, it was commonly used the other way round: Carol, as the wife that Bob rejected, took the place of Alice, who was desperate to escape Bob's wooing. Nowadays it's often achieved via the tropes that the fantasy or science fiction genre makes possible, e.g. shapeshifting, body swap, or some other device by which Carol could plausibly fool Bob into believing that she is Alice.

This is one of The Oldest Tricks in the Book and a common origin story for mythological heroes (often with a god playing the role of Carol). As a general rule, the farther back you go in time, the more likely it is that the person you're sleeping with isn't who you think they are, though it's seen something of a revival in Soap Operas (usually with the added justification that the person being fooled is drunk).

For once, the Law of Inverse Fertility is inverted: a woman who uses this to try to get pregnant is likely to pull it off, even after one time in bed.

When Played for Laughs, expect Carol-as-Alice to be much better in bed than the real Alice. If it's Dan impersonating Bob, expect Alice to notice "Bob" has grown a few inches, especially if it's a parody. For cases when Bob suspects something, see Not Right in the Bed. (A rather twisted case of Spot the Imposter in both cases.) Basically, a sub-category for Black Comedy Rape.

Compare with Bride and Switch and Double Standard: Rape, Sci-Fi. If Bob knows who he's with, but it becomes apparent he's imagining it's someone else, you're looking at Wrong Name Outburst. Not to be confused with a Trick Bed.

This is basically the definition of rape by deception (or rape by fraud), though that crime can also include situations like doctors performing unnecessarily invasive sexual acts on patients while claiming that they're necessary for diagnosis or treatment. Most areas do not recognize this as a crime, but in the U.S. under expanding federal definitions of rape to include any non-consensual penetration, it may qualify and be prosecuted in the same vein as all other forms of rape. In other words, Do Not Try This at Home. Seriously. We mean it.