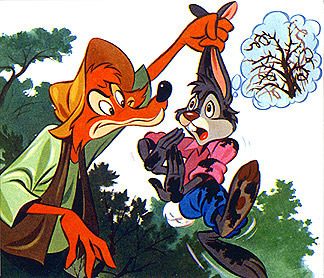 Don't throw him in the briar patch;
Just eat him.
"Skin me, Br'er Fox, snatch out my eyeballs, tear out my ears by the roots, and cut off my legs, but do please, Br'er Fox, don't fling me in that briar patch!"
— Br'er Rabbit, Song of the South
Advertisement:

A deliberate use of Reverse Psychology in order to get a desired result. Alice begs and pleads with Bob not to take a certain course of action — do anything, anything at all, but that! Terror, fear, hysterics, every scenery-chomping trick is pulled out to make Bob think that this is the worst possible thing he could do to Alice. And thinking that, he does it.

Naturally, it's exactly what Alice wants or needs.

If Bob takes pity on Alice, it's Springtime for Hitler. Alice may beg "Anything but That!" at some point. Compare Try and Follow and Fake Weakness. May (still) be liable to Threat Backfire or Reverse Psychology Backfire. Almost always a subtrope of Schmuck Bait. If it works, Alice gets an Unishment. Mischief for Punishment is when Alice acts out deliberately to get the "punishment" she wants. May also overlap with Too Kinky to Torture and Forbidden Fruit.

One of The Oldest Tricks in the Book. In modern fiction, writers often use this trick if they want to emphasize how stupid a villain is, or make an amusing I Know You Know I Know situation out of it.

Has nothing to do with the act of patching software, or cloth for that matter.

The button then causes the hammer to fly into Steel's hands, followed by the latter kicking Burke's ass.