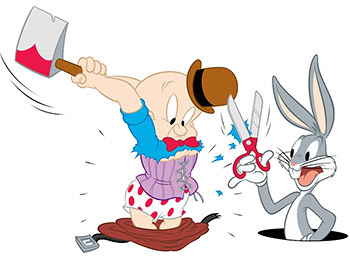 That's what happens when you tangle with the wabbit.
“First, Bush invades my home turf. Then he takes my pals. Then he makes fun of the way I talk (probably). Now, he steals my right to raise a disobedient, smart-alecky son! Well, that’s it!”
— Homer Simpson, The Simpsons, “Two Bad Neighbors”
Advertisement:

The Trickster who specializes in unstuffing stuffed shirts, deflating puffed-up egos, trivializing the self-important, and confusing know-it-alls. The Karmic Trickster is normally harmless, even friendly, if left alone. Once their dignity is dented or their person threatened, however, it's no holds barred — the target is in for humiliation, embarrassment, and bewilderment. Any tactic is fair game as long as it does not cause actual physical harm to the target. Only when the target has surrendered does the Karmic Trickster conclude their vengeance.

Being completely self-centered, the Karmic Trickster normally acts only on their own behalf, but can be convinced to help others — they have a soft spot for babies, innocents, and those who are truly good, and when their sympathy is evoked will go to the ends of the earth for them. Sometimes they sows chaos for the sake of chaos, but only when they gets carried away in the midst of one of his campaigns. Most of the time he simply wants to be left alone, and heaven help whoever messes with him! Given all of their righteous retribution, sometimes these characters can exist somewhere between this, The Prankster and borderline Neutral Evil if their self-righteous attitudes end up attacking characters for little more than existing nearby them and can often just seem like Comedic Sociopathy if our trickster operates as a Designated Hero regardless of where they sit on The Trickster scale and the only Karmic anything involved about them is being a Karma Houdini.

Between them, Karmic Trickster and The Prankster comprise two-thirds of The Trickster classic. His actions are as much to teach as to gain revenge, where The Prankster is the embodiment of mischief for mischief's sake.

May masquerade as The Fool or vice versa; whether silly or wise, they will always display Hidden Depths (if only a knack for comedy and Simpleminded Wisdom) whom the audience may laugh at. This is not always true of other Tricksters in general, who are sometimes cast as cloud cuckoolanders, irrepressible agents of chaos, lesser chaos-bringers who are constantly being taught a lesson themselves, or cosmic butt monkeys. Such traits rarely apply here. Indeed, the Karmic Trickster is the least vulnerable to Hoist by His Own Petard or to Counter Zany (which they can often turn into Zany Scheme Chicken).