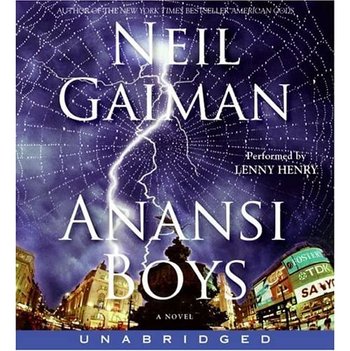 Anansi Boys is a 2005 novel by Neil Gaiman, set in the same fictional universe as his earlier American Gods, although not a direct sequel to that story — more of a Lighter and Softer spinoff, and it was conceived earlier. The protagonist is the nice but unambitious and chronically unlucky Charles Nancy — nicknamed 'Fat Charlie' by his father at age 10 and dogged by the name ever since, despite not actually being fat — who's somewhat nonplussed to be told that his recently deceased father was the African trickster god Anansi. Oh, and the reason Fat Charlie doesn't have his dad's godlike powers is that they went to the brother he never knew existed, who he can contact by giving a message to a spider. Not believing a word of this, Fat Charlie nevertheless gets drunk and tells a spider to invite his brother to come for a visit.

Within a couple of days of Spider turning up, Fat Charlie has lost his job and fiancée, and is also wanted by the police. Willing to do anything to make his brother go away again, he finds a way to contact the other gods and makes a deal. And then things start to really go wrong.

Lenny Henry has voiced the audiobook and voiced Mr Nancy in a BBC Radio adaptation. A film version allegedly fell through because the studio wanted a predominantly white cast (despite the characters' Caribbean heritage being central to the mythic elements of the story), and Neil Gaiman steadfastly refused. However, he eventually resumed working on an adaptation, which was originally supposed to be a BBC mini-series, but is now being made into a mini-series for Amazon Prime