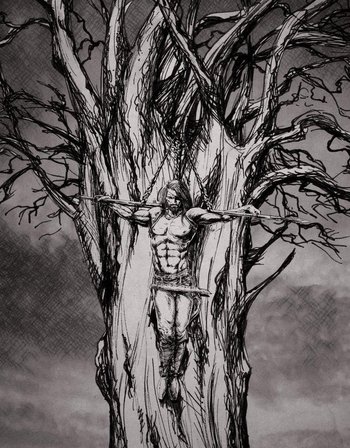 Odin hanging from Yggdrassil for 9 days, in the darkness, with his side stabbed by a spear, and with no help from other gods. He died, and was reborn wiser. Hmm, haven't we heard that story elsewhere?
Edward: Hear how they talk to us? [laughs] The Gods. Listen pal, back in the day we were worshipped by millions.
Dean: Times have changed.
Edward: Tell me about it. All of a sudden this Jesus character is the hot new thing in town. All of a sudden our altars are burned down and we are being hunted down like common monsters.
— Supernatural, "A Very Supernatural Christmas"
Advertisement:

Whenever a fictional story involves non-Christian themes, a western adaptation will emphasize the elements most familiar to followers of Abrahamic religions, most usually Christianity. At times, they will be totally rewritten to turn all of the members of the religion into direct analogues of Christian figures.

In mythologies without a "God of Evil", the least likable deity (usually the one in charge of death, fire, or occasionally winter) will be Flanderized into such a figure who is a direct analogue of Satan. Any depiction of the afterlife will be transformed into either Heaven or Hell. The chief male deity will always be a stand-in for God, with a long beard and omnibenevolent qualities for bonus points. Servants of the chief male deity may be turned into angelic beings, or other gods will seem so subservient they may as well be angels, despite them being at each other's throats in most mythologies. For their part, demigods and heroes, who in mythology were usually busy solving their own troubles and killing minor monsters, might receive here the unenviable task to save the whole humanity, especially from their own sins. A Crucified Hero Shot can be optional.

That is, it takes a real-life religion and turns it into Crystal Dragon Jesus. May either be a form of Viewers Are Morons or bad research, depending on how much the writers understood the original religion.

It should be noted that this has happened a number of times historically, as it was both an useful resource and an inevitable point of view. As proselytizing sects spread into new regions, they often incorporate existing beliefs into their canon in order to make the new religion more palatable to others. For example, the medieval story of the hermit Josaphat (not to be mistaken with the King Jehoshaphat of Judea, or the 17th-century martyr St. Josaphat) was a Christianized version of the life of Gautama Buddha (with "Bodhisattva" mutating into "Josaphat"). On the opposite end, polytheistic cultures "converted" to Christianity simply transferred the worship of individual gods to the saints that most resembled them (in some cases, the old pagan gods were remade into saints). The Catholic church in particular got a lot of mileage out of this, and seeing some processions for some saints (in e.g. Latin America), it's not hard at all to imagine what the religious customs prior to Christianity may have looked like.

The Book of Invasions

Red from Overly Sarcastic Productions, talks about how due to interference and censorship by Christianity, a lot of the original context and origins of the Celtic and other mythologies have been vastly altered and changed to suit the needs of the Church. In particular the Tuatha DÃ© Dannan and other deities were changed into kings, fairies and demons.

The Book of Invasions

Red from Overly Sarcastic Productions, talks about how due to interference and censorship by Christianity, a lot of the original context and origins of the Celtic and other mythologies have been vastly altered and changed to suit the needs of the Church. In particular the Tuatha DÃ© Dannan and other deities were changed into kings, fairies and demons.