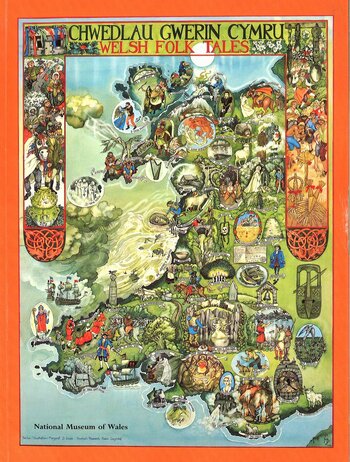 The world of Welsh Mythology
"Ac yna y kymeryssant wy blodeu y deri, a blodeu y banadyl, a blodeu yr erwein, ac o'r rei hynny, asswynaw yr un uorwyn deccaf a thelediwaf a welas dyn eiroet. Ac y bedydyaw o'r bedyd a wneynt yna, a dodi Blodeued arnei."
—Math, Son of Mathonwy note And they took the flowers of the oak, and the flowers of the broom, and the flowers of the meadowsweet, and from those they conjured up the fairest and most beautiful maiden anyone had ever seen. And they baptized her in the way that they did at that time and named her Blodeuedd ("flower-face").
Advertisement:

The Welsh collection of stories called the Mabinogion is one of the major surviving bodies of Welsh myths. The stories in their modern forms are derived from two medieval Welsh manuscripts, the White Book of Rhydderch

and the Red Book of Hergest,

along with a collection of smaller texts, but those are simply the oldest written versions of stories that are based on older oral legends; some motifs and plots can be traced back to the early Iron Age (1st millennium BCE). They are the product of a highly developed narrative tradition, both written and oral.

The name is the plural of Mabinogi, somewhat archaic Welsh, but interestingly enough, the work should be called the "Mabinogi" since it consists of four branches of a single Mabinogi rather than multiple ones. A scribe made a mistake in the first branch, Pwyll Pendefig Dyfed, when he referred to it as the Mabinogion, which he later rectified in the other branches, but the name stuck. The best translation of "Mabinogi" appears to be "tales of childhood". Mab is the Welsh word for "son" (it's from the same root as the Gaelic mac), and the consonant-mutation "Vabinogi" occurs in "Llyma Vabinogi Iesu Grist", a medieval manuscript (Peniarth MS 14) describing the childhood of Jesus.

The work is divided into four branches, four native tales, and three romances. Also sometimes included is the Tale of Taliesin, though it belongs to a much later period.

The Four Branches create an Arc that follows the mythological heroes of Welsh pre-Christian mythology. The branches are connected by the struggles of the children of Llŷr and the life of Pryderi. They are, in order:

Two of the native tales and the three romances are in the most part older versions of Arthurian Legend that differ slightly in the actual contents.

The native tales are:

Apart from "The Tale of Taliesin", these three were the last parts of the Mabinogion to be composed, probably around the same time as most of the other medieval Arthurian stories, but draw on older roots.

In addition to the eleven tales listed above, a twelfth story, The Tale of Taliesin, is sometimes included as part of the Mabinogion (most notably in the earliest and most famous English translation, by Charlotte Guest). However, it was written down much later than the other texts (in the mid sixteenth century; versions of the other tales date to as much as five hundred years earlier).

The Mabinogion provides examples of:

open/close all folders
Multiple works
Pwyll, Prince of Dyfed
Branwen, Daughter of Llŷr
"Math, Son of Mathonwy"
Culhwch and Olwen
And thus ends here this Branch of the Mabinogion. note Which will in subsequent branches be called the Mabinogi