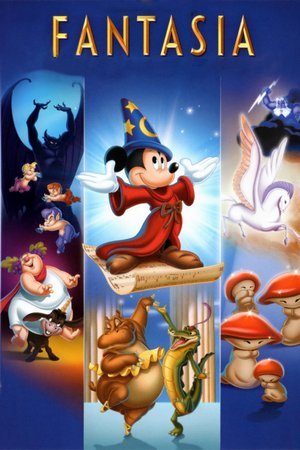 The greatest classical symphony music video ever made.
What you're going to see are the designs and pictures and stories that music inspired in the minds and imaginations of a group of artists.
— Deems Taylor
Advertisement:

Fantasia is a 1940 animated film from Walt Disney collaborating with celebrated conductor Leopold Stokowski and the Philadelphia Orchestra and the third entry in the Disney Animated Canon. It's a surreal, yet classic blend of animation and Classical Music, often considered to have been ahead of its time back in the day. Another way to describe it as is Silly Symphonies: The Movie.

The film consists of animated sequences synchronized to classic pieces of music. They are as follows:

A sequel was made in 1999: Fantasia 2000.note Yes, the movie called Fantasia 2000 was released in the year 1999. Unlike most Disney sequels, this one was actually in accordance with Walt Disney's intent; the original idea was to update the film every year, animating one or two new songs every time and rotating older ones out of the print to make room for the fresh material. In addition, the prestige of being in a Fantasia film meant that Disney had no trouble lining up celebrities to introduce the various sections of film.

Disney had once planned an international-themed follow-up to Fantasia called Musicana. This would have entailed various shorts from various countries with the music styles of those countries. It was ultimately shelved.

Sequences proposed for this film included:

Disney later planned another international-themed follow-up, called Fantasia/2006, and later Fantasia World. After the cancellation of its theatrical release, some of the completed shorts received limited or direct-to-video releases. In 2010, Walt Disney Home Video announced plans to include the feature on the Fantasia Special Edition* referred to in early press materials as either a Platinum Edition or a Diamond Edition instead 2-Movie Collection Blu-Ray, but by the time the Collection reached stores, they decided to only include one short.

The sequences prepared for this one include:

A platform game for the Sega Genesis loosely based on the first movie was released on 1991, though it's widely regarded as mediocre at best. A 2014 rhythm music game by Harmonix, Fantasia: Music Evolved has been released for the Xbox 360 and Xbox One. Yen Sid is also a major character in the Kingdom Hearts and Epic Mickey series.

In 2010, "The Sorcerer's Apprentice" sequence was expanded into an In Name Only live-action fantasy adventure film starring Nicolas Cage and Jay Baruchel aptly named...The Sorcerer's Apprentice. A Live-Action Adaptation of "Night On Bald Mountain" sequence was put in development, being written by Matt Sazama and Burk Sharpless the creative team behind Dracula Untold, but it was later scrapped.

Not to be confused with the American Idol winner Fantasia Barrino, or the name of the fantasy world in the film version of The Neverending Story, or with Tales of Phantasia.

Compare later Disney films Make Mine Music and Melody Time which both feature music-based shorts, even using a few of the unused ideas from Fantasia. Contrast Allegro non Troppo, the 1977 Bruno Bozzetto answer to Fantasia, which hovers comfortably somewhere between Affectionate Parody and Take That! (and is just as breathtakingly beautiful). Compare also the 1943 Merrie Melodies short A Corny Concerto, also an Affectionate Parody of Fantasia.

The fairies paint the leaves yellow and red when transitioning summer to autumn.

Example of:
Painting the Frost on Windows

The fairies paint the leaves yellow and red when transitioning summer to autumn.