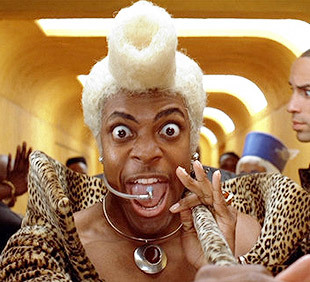 Merciless, unrelenting foolery... in space!
Blue: (singing) Ain't no mountain high enough! Ain't no valley low enough! Ain't–
Julius: Blue, shut up. I don't wanna see all your smilin', shufflin', or hear all your minstrly-show singin' on this bus.
— Remember the Titans
Advertisement:

A black, primarily male comic relief character who makes the audience laugh by displaying the traits of a racist stereotype of black men. He'll usually be boastful out of danger (but a cringing wreck in the face of it), goofy, loud, annoying, and ultimately incompetent. These characteristics also serve to show the (usually white) protagonists as calm, brave, and adept. Female examples, when they do exist, are likely to adhere to ratchet or "strong, in'a'pen'ant woman who don't need no man" stereotypes, where the core characterization is largely the same: loud, boorish, buffoonish, obnoxious, and overly "extra" and prone to overreactions and long-winded boasting, though she is generally more likely to be at least somewhat competent.

This is a trope with a long history in Hollywood movies as far back as the '20s; in the very early days, it was often played by a white actor in blackface. No mystery or old-dark-house movie was complete without the stock character of the cringing black servant or chauffeur who was extremely superstitious ("Boss! Spooks!"). This stereotype was so popular that actors like Lincoln "Stepin Fetchit" Perry even made whole careers out of the role. This in turn was a shamelessly racist adaptation of the old melodrama and theatre trope of the incompetent domestic servant, and more generally of darkies from minstrel shows.

The trope saw continued use into the 1990s but with the Uncle Tomfoolery character being a duo with the White character, but growing racial awareness and an increasing interest in action heroes who just happen to be black, such as Denzel Washington and Samuel L. Jackson, has caused it to gradually lose popularity. Accusations of Uncle Tomfoolery will continue, in part because there are plenty of black actors who happen to be good at comedy, though the 'hip' elements have decreased.

The trope's name is derived from "Uncle Tom,"

a common slang term for a black person who is excessively subservient to white people. The original Uncle Tom (of Uncle Tom's Cabin) was anything but subservient, comic or cowardly; however, the immensely popular stage adaptation of Uncle Tom's Cabin replaced the novel's serious social commentary with melodrama and filled it out with comic interludes that were often heavy on ugly stereotypes. This led to some serious Misaimed Fandom from racists who went to see black people mocked in what became known as "Tom Shows." Engaging in Uncle Tomfoolery is sometimes referred to as "Cooning."