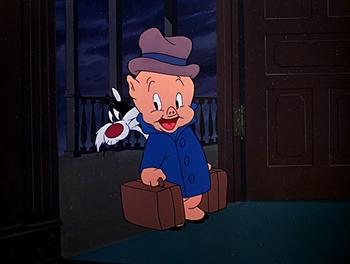 "Scaredy Cat" is a 1948 Looney Tunes cartoon short featuring Sylvester and Porky Pig directed by Chuck Jones. The short is the first of the Porky/Sylvester "horror vacation" trilogy, followed by Claws For Alarm in 1954 and Jumpin' Jupiter in 1955.

The plot begins with Porky Pig and his pet cat Sylvester arriving at their new house in the middle of the night, which Sylvester finds scary. But as the unfazed Porky only wants to get a good night’s sleep, the easily frightened Sylvester discovers that a cult of murderous mice inhabit their new house and plan to make the new owners their next victims.

This cartoon is also notable for being the first use of the name "Sylvester".

Edited into 1977's Bugs Bunny's Howl-oween Special, where clips from it and Claws For Alarm where combined and re-arranged into one narrative, with Witch Hazel shown as being responsible for the horrific events while Porky and Sylvester are staying at her hotel.