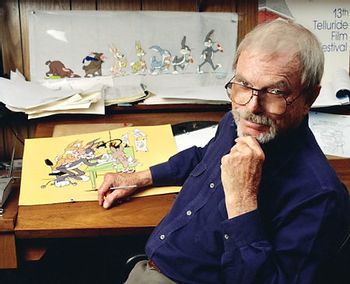 Charles Martin "Chuck" Jones™note  Yes, his name is trademarked. (September 21, 1912 – February 22, 2002) was an American animator, director, and writer, and is one of the most revered figures in the History of Animation.

If Tex Avery — hypothetically put forward as the original animation gag man — was the Trope Maker, then Chuck Jones could well have been the Trope Codifier of much of what we consider cartoon comedy on the Western Animation side of the fence. During his tenure with Warner Bros., he directed an impressive 207 Looney Tunes and Merrie Melodies shorts (220 if you count his Private Snafu work), four Looney Tunes television specials, the feature-length compilation The Bugs Bunny/Road Runner Movie, and seven modern Looney Tunes shorts.

During The Golden Age of Animation, Chuck began working as a cel washer for Ub Iwerks before working his way up the corporate ladder, so to speak, being mentored by the likes of Avery and Friz Freleng and animating for Bob Clampett. In 1938, he finally received a shot at directing a cartoon, inheriting the crew of the recently departed Frank Tashlin. His early work mirrored Walt Disney's Silly Symphonies in content and tone, heavy on childlike fantasy and completely lacking in comedy; many featured the ever-so-cute Sniffles the Mouse as the main character. After a few years at Warner Bros., Jones would eventually grow the beard and adopt the more humorous and zany style of his studio contemporaries. Sniffles would become a bit of a cute prankster with an uncontrollable Motor Mouth before Chuck ended his series and began writing for other characters, eventually inheriting Bugs, Daffy and the rest of the more famous Looney Tunes and Merrie Melodies characters.

In World War II, Jones did his bit working with the Army Signal Corps producing educational cartoons such as Private Snafu under the supervision of Ted Geisel, a.k.a Dr. Seuss.

Chuck's work as an animation director for WB in the 1950s took the elements Avery had laid out and stretched them to their most logical (illogical?) extremes. On the one hand, his most prolific original characters, the Road Runner and Wile E. Coyote, used no real dialogue, instead relying on expertly timed facial expressions and slapstick that even The Three Stooges might have envied. On the other end of the spectrum, Jones's work with Bugs Bunny and Daffy Duck, although not discarding the slapstick, brought comedic wordplay to a level not seen in animation up to that point. In addition, he refined their personalities, such as making Bugs a Karmic Trickster who'd generally bedevil people only after they'd threatened or mistreated him, and refashioning Daffy into a self-centered, insecure, and invariably unsuccessful pretender to Bugs' trickster throne. As Jones himself later put it:

"In my dreams, I am Bugs Bunny; when I wake up I find that I am Daffy Duck."

On top of all that, with shorts ranging from "One Froggy Evening" to "Duck Amuck," as well as recurring characters like Elmer Fudd,note after his transition from Avery's Egghead Hubie and Bertie, Charlie Dog, Wile E. Coyote and the Road Runner, Pepé Le Pew, Marvin the Martian, Ralph Wolf and Sam Sheepdog, Marc Antony and Pussyfoot, and the Three Bears, Jones created some of the best-loved shorts in the Looney Tunes series.

Jones's time at Warner Bros. ended rather abruptly, after it was discovered that he had violated his exclusive contract – a violation that was discovered when he left his name on an independent project that was subsequently shopped to the studio for distribution, that being the UPA feature Gay Purr-ee. (Earlier, during Warner's temporary shutdown of its cartoon studio in 1953 as it hopped on the 3-D Movie fad, Jones spent four months at Disney, where he chafed under that studio's rigidly hierarchical structure and made no real contributions save for some minor uncredited work on Sleeping Beauty.)

Post-Warner, Jones still had a few tricks up his sleeve. He went to MGM and took over the Tom and Jerry franchise for a time (although, because of a lower budget and Chuck's self-admitted lack of understanding of the characters, his T&J shorts are often criticized for not being up to either his own standards or those of Bill Hanna and Joe Barbera, who had originated the series – never mind that the Gene Deitch cartoons that came in between were deranged and far worse on a technical level than what Jones put out), while also creating a few memorable one-shot cartoons based on children's books, most notably the Oscar-winning "The Dot and the Line". Jones also found himself reuniting with Ted Geisel, a.k.a Dr. Seuss, and with the help of the voice of Boris Karloff, created the much-beloved television adaptation of How the Grinch Stole Christmas!, which is still rebroadcast every holiday season on Warner Media-owned networks. Jones is also famous for his well-animated version of The Phantom Tollbooth, making him and Frank Tashlin the only Looney Tunes directors to direct a feature film that wasn't just a compilation of old shorts.

Jones's later projects came less frequently. He produced several TV specials in the '70s and '80s (including three hailed adaptations of stories from Rudyard Kipling's The Jungle Book), tried his hand at Newspaper Comics with the short-lived daily strip Crawford, storyboarded a bit for Who Framed Roger Rabbit (though he ended up hating the final product), and helmed several '90s Looney Tunes revival shorts such as "Chariots of Fur" and "Superior Duck". He also started inking and painting collectible cels for sale at various venues. His absolute last project would be the Adobe Flash web series Timber Wolf, hosted on the Warner Bros. official site.

In addition, it can be claimed that the animated segments he did for Stay Tuned and Mrs. Doubtfire make him a One-Scene Wonder for a couple of films he didn't technically appear in. Oh, and he has cameos in Gremlins and Innerspace. He was also seen at the launch of

The WB Television Network, drawing Michigan J. Frog, the network's mascot, who then came to life and flipped the switch to start the network.