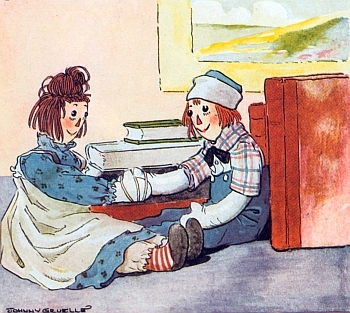 Raggedy Ann was a series of storybooks, introduced by American writer and illustrator Johnny Gruelle in 1918, about the adventures of a living rag doll. Gruelle based the stories on a ragdoll he gave to his daughter, Marcella, who also became a character in the books as Raggedy Ann's owner. Seeing the possibilities with the character, the Gruelle family went on to market a line of Raggedy Ann rag dolls that have, arguably, become far better known than the books.

Following Gruelle's death in 1938, the book series continued under other authors and illustrators (though still credited to Gruelle) into the 1970s. Raggedy Ann and her adventures were also adapted into animation several times, including Fleischer Studios/Famous Studios animated shorts, Christmas and Halloween specials crafted by Chuck Jones, a little-known animated series from the late 1980s and early 1990s, and even a big-screen movie.

Raggedy Ann herself is a gentle but adventurous rag doll with a kind heart, literally. She actually has a candy heart, with the inscription I Love You sewn into her chest. Raggedy Ann is considered the leader of Marcella's toys, due to the fact that Marcella carries her everywhere, so Ann has seen more of the world than any of the other toys.

Raggedy Andy was introduced as Ann's brother in the second book and has been by her side ever since. He's a bold, adventurous type, and more mischievous and rash than his sister. Andy is fiercely loyal to Ann, and he is always there to look out for her.

Over the years, several other characters were introduced to round out the family. They included dogs, cats, a raggedy baby and even a camel with wrinkled knees.