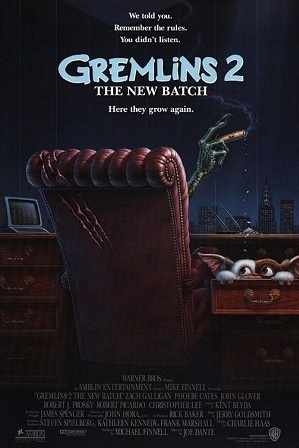 Gremlins 2: The New Batch is the 1990 sequel to Gremlins, again directed by Joe Dante.

Gizmo is still living in Mr. Wing's old shop in Chinatown, New York when his keeper dies. The place is immediately demolished by the local Clamp corporation and Gizmo captured by a pair of scientists who operate out of the Clamp skyscraper. Billy and Kate, having recently started working in the ultra high-tech building, rescue Gizmo, but not before an unfortunate accident creates a new strain of Gremlins who overrun the structure and threaten the city. The fact that those scientists are conducting genetic research really doesn't help matters...

Dante only agreed to make the sequel if he was given free rein by the studio, and he pretty much went nuts. The resulting film is far more fourth-wall breaching and overtly comedic than its predecessor, with everybody from Hulk Hogan to Daffy Duck to Christopher Lee putting in an appearance. (Tony Randall's voice-performance as the Brain Gremlin is a particular stand-out.) Fans remain divided over whether it is better than or didn't live up to the original.

A video game adaptation also came out in 1990 for the Nintendo Entertainment System and was considered to be superior to the film.

In 2016, Zach Galligan announced that Warner Bros. will be making a direct sequel to the film, while other sources have stated that Gremlins 3 will be a reboot. Either way, the Gremlins franchise is not completely dead.