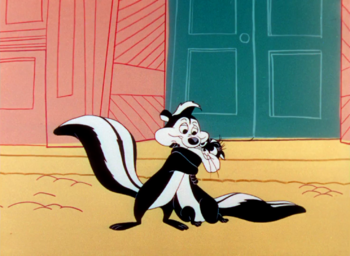 "Love in its sweetest form"
Pepé Le Pew is visiting New Orleans in the hopes of finding a bride. As it so happens, a local cat, Fabrette, was unlucky enough to be born with white stripes down her back, putting quite the damper on her attempts to find true love. She spies Pepé and, in an incredibly rare instance for him, falls for him at once...until she gets a whiff of his odor. Still, he seems like her one chance. Can she find a way to make it work?
Advertisement:

This short is something of an oddball when it comes to Pepe's shorts, although a bit less so than Odor of the Day. This was the only Pepé short directed by Abe Levitownote Notable for being behind some of the more beloved and memetic Looney Tunes hits of the 50s such as Robin Hood Daffy and Ali Baba Bunny and it shows by shaking up the formula just enough while still sticking to the same idea. Unlike most Pepé episodes, the cat's skunk stripes are indelible; she would happily get with Pepé if she could. And Pepé is not a handsy Handsome Lech but a man confused by his date's mixed signals, embracing him one moment and fleeing from him the next. When he realizes his body odor is the problem, he is mortified and resolves to do something about it.

Overall, this has caused many to consider this short to have aged surprisingly well compared to Pepé's other shorts, with only a few scant bits of Values Dissonance being seen in the tail end of the short; in a way that also, surprisingly, doesn't involve Pepé. As a result, though it may not have won an award like For Scent-imental Reasons did, many proclaim it to be one of the best shorts he was involved in; and one of the few you can watch without feeling uncomfortable in the process.