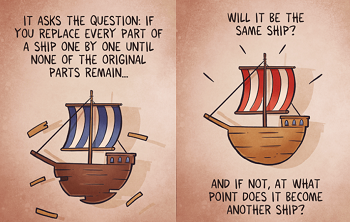 Trigger: This ol' broom... has had 17 heads and 14 new handles in its time.
Sid: How the 'ell can it be the same bloody broom, then?
Trigger: Well, 'ere's a picture of it; what more proof do you need?
— Only Fools and Horses, "Heroes and Villains"
Advertisement:

The Ship of Theseus is a classic philosophical thought experiment about the nature of identity. Is an object simply the sum of the specific parts that compose it? And if those parts are gradually replaced, is it still the same object?

The classic story goes as follows: Theseus sails the world on his famous ship, but as the pieces of the ship begin to wear down, he replaces them. By the time his voyage is finished, every single part of the ship has been replaced. So is the ship at voyage's end still the same ship that first set sail? If yes, what would have to have to happen for the ship to stop being considered the original? If no, at what point did the ship stop being the original?

Another version holds that, after sailing the world on his ship, Theseus docks it and keeps it in working order by gradually replacing all of its pieces. Someone else buys all the pieces that Theseus discards and assembles a second ship from them. So which is the ship that sailed the world? The one in Theseus's dock, or the one built of all the pieces of the original ship?

Or for a more concise example, if you have a hammer and the head breaks, you replace it. But if later on the handle breaks, you'd have to replace that as well. But would it be the same hammer anymore?

Due to the above exchange on Only Fools and Horses, British tropers may be more familiar with referring to this dilemma as the "Trigger's Broom Paradox".

Examples of the conundrum in fiction can play out with virtually any object. A common alternative to this is the "Grandfather's Axe" story. The trope gets a lot of play in science fiction when we consider whether Cybernetics Eat Your Soul. If you replace parts of your body with machines, are you still really you?

The theory is discussed and used to make the White Vision realise that he is the real Vision.

The theory is discussed and used to make the White Vision realise that he is the real Vision.