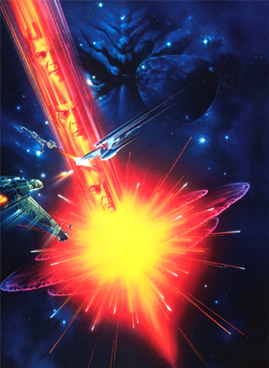 The battle for peace has begun.
"There is an old Vulcan proverb: only Nixon could go to China."
— Spock
Advertisement:

The One With… the Cold War IN SPACE!

Star Trek VI: The Undiscovered Country is the sixth movie in the Star Trek film series, released in 1991.

It is a grand finale for the classic Trek crew (''as played by the original actors, at least'') which resolves the previously ongoing conflict between the Federation and the Klingons with a Tom Clancy ''IN SPACE!'' storyline. In part because of its more political themes and real-world connections, The Undiscovered Country is Darker and Edgier than its predecessors.

After an environmental calamity, the Klingons' infrastructure collapses and their leader sues for peace. Does this remind you of the end of the Cold War? It should. The Iron Curtain was coming down at the time of production and the Klingons had always been stand-ins for the Soviets. Kirk, ever the cynical cowboy, still doesn't trust the Klingons but is volunteered by Spock to escort their leader to the peace talks without asking him first. But Kirk is not the only one who never wanted peace—a mysterious conspiracy with accomplices from both sides of the conflict means to drive the Federation and Empire into a full-scale war,framing Kirk and McCoy for murder in the process.

Nicholas Meyer, the director of Star Trek II: The Wrath of Khan, returned to the helm for this one. As evidenced by the page quote, the film lacks anything resembling subtlety, but its tongue-in-cheek satire and heavy-handed moral are just as good if not better that way. If nothing else, it's considered much better than The Final Frontier. In any case, most fans consider it a worthy send-off for the original cast.

While this is the finale for the majority of the TOS cast, Kirk, Scotty, and Chekov appear in the next film to "pass the torch" of the film franchise to The Next Generation.

The Undiscovered Country includes examples of the following tropes:

open/close all folders
Tropes A-D
Tropes E-M
Tropes N-Z
"Captain's log, stardate 9529.1. This is the final cruise of the starship Enterprise under my command. This ship and her history will shortly become the care of another crew. To them and their posterity will we commit our future. They will continue the voyages we have begun and journey to all the undiscovered countries, boldly going where no man—where no one—has gone before."
Feedback

In Space All are Cold Warriors

Hopes for peace between the Klingons and Federation requires getting past decades of hostility.

In Space All are Cold Warriors

Hopes for peace between the Klingons and Federation requires getting past decades of hostility.