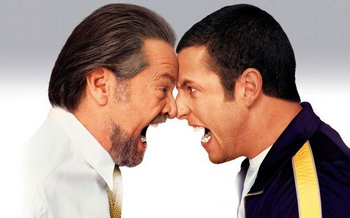 When the unstoppable pork meets the immovable sausage.
Dredd: You killed innocent people!
Rico: A means to an end!
Dredd: You started a massacre!
Rico: I caused a revolution!
Dredd: YOU BETRAYED THE LAW!
Rico: LAAAAAAAAWWWWW!
— Judge Dredd
Advertisement:

When a work is populated by more than one Large Ham, and at least two get a scene together, it will usually turn into Ham-to-Ham Combat, where they try to out-over dramatic each other. The scene can become either really funny or really corny, or both, and really fast.

Note that they do not have to be enemies. It can be the Big Bad and The Dragon trying to out-evil-laugh each other, or a pair of heroes spouting Bond One Liners as they mow down the Mooks. The point is that their screen presences and overacting are competing.

Compare World of Ham. If they're villains trying to creep each other out, that's Eviler Than Thou. Bigot vs. Bigot is when these characters are not only hammy, but extremely opinionated as well. Contrast Snark-to-Snark Combat.