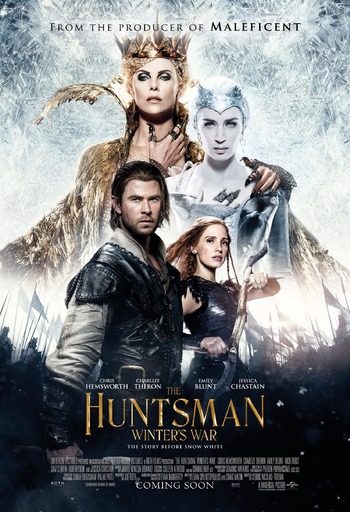 "There is an evil within the Mirror that has only grown in power."
"What does the Mirror show you? What do you see? An oft told tale. That of Snow White, how she vanquished the evil Queen Ravenna and took her rightful place on the throne. But there is another story, one you have not yet seen. One that comes long before 'happily ever after'."
— Narrator
Advertisement:

The Huntsman: Winter's War is both a prequel and a sequel to the 2012 action fantasy Snow White and the Huntsman and combines elements of both the German folktale of Snow White and Andersen’s The Snow Queen, and was released in North America on April 22, 2016.

Decades before she came to Snow White’s kingdom, the evil Queen Ravenna (Charlize Theron) had a sister named Freya (Emily Blunt) who fell in love with a man of Ravenna’s court. She became pregnant by him, but one night she found that her beloved had murdered their daughter. Her great despair caused Freya’s magical powers to emerge and she became the Ice Queen. Seeking her own kingdom she went to the north, where one by one the once fertile realms are turned into the Grim Up North by Freya’s power.

As she lays waste to the kingdoms of the North, she kidnaps their children and trains them to become her Huntsmen, with her one rule being that they must never know love. Soon two of the children stand out as the best ones: Eric (Chris Hemsworth) and Sara (Jessica Chastain). But when they are discovered to have fallen in love and married Freya seemingly has Sara killed and Eric cast out of her kingdom.

Seven years later, after Ravenna’s defeat at the hands of Snow White and Eric, Freya has completed her conquest of all the kingdoms of the North and turns her eyes towards Snow White’s kingdom and her late sister’s Magic Mirror, which has been lost en route to a magical Sanctuary for safekeeping. Eric must embark in a quest to bring the Mirror beyond Freya’s reach before she gets her hands on it and uses its power to conquer the world.

"And so, some fairy tales do come true. But none ever truly end."