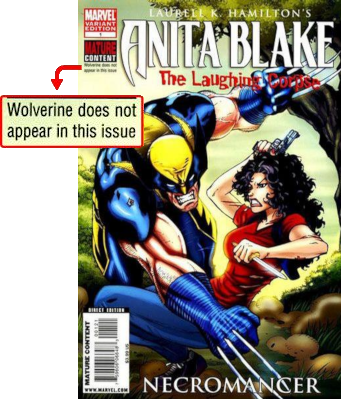 Not only that, but he doesn't appear in any of the other issues of the series either.
"I stopped reading X-Men about the same time they started putting Wolverine on the cover of comics in which he didn't actually, technically, appear."
— Lore Sjöberg, The Book of Ratings, "Marvel Supervillains (Part I)"
Advertisement:

Certain popular characters within a fictional universe (and sometimes in real life) get used in gratuitous and/or inappropriate ways purely to enhance marketing.

Superhero teams in comic books constantly change. Characters join and leave so often that any given superhero team is often unrecognizable within a year. Other superhero teams have a Heroes Unlimited setup, where there are tons of characters and no two issues will have the same group. As a result, there are a lot more fans of particular comic-book characters than there are fans of particular comic-book teams or titles. Fans will like a new team book not if it has a name they recognize, but if it has characters they recognize. A new title will often sell based on whether it has already-popular characters in it, and existing characters will often be made more or less powerful based on how popular they are with readers. This is done so that characters can be viewed by more readers, and also to find the best possible combination for a team for sales.

This leads to one of the most overused tricks in comic-book marketing. When a character is very popular, they will often get Wolverine Publicity: appearing in every comic book title and format possible, smearing them all over even the non-related covers with all the fine delicacy of bacon-flavoured soap. The character will often have a flood of mini-series which desperately search for something new to do with them ("in this issue, Wolverine visits Turkmenistan!"), until the fans are sicker of them than they would be of bacon if they had to bathe in an offal gutter at the meat-packing plant too.

If a team has multiple titles, with different members in each one, the promoted character will somehow manage to appear in both titles — even if the two stories are supposed to be happening at the same time.

A subtrope of Face on the Cover. Compare Spotlight-Stealing Title, Advertised Extra, Billing Displacement, Clickbait Gag, Covers Always Lie, Lady Not-Appearing-in-This-Game, Overused Copycat Character, Red Skies Crossover, and Sir Cameos-a-Lot. When an iconic villain shows up in an installment supposedly featuring someone else as the Big Bad, this becomes Hijacked by Ganon. If an actor or character engages in self-promotion (whether in-universe or out), this could shade into It's All About Me. In music this can be one of the factors that leads to one or two members being The Face Of The Band.

Not to be confused with the idea that Wolverine is becoming the focus of the Marvel Universe (although that certainly has spawned many examples of this trope). Whenever Marvel wants to do without him for a while, they usually have Magneto rip the metal off his bones...

Note that if the popular character is a legitimate lead character in a specific work, then the trope should not be listed in it. It may count for the character as a whole, but not for that work. "Wolverine buys an ice-cream" may be an example; "Wolverine saves the universe during the Crisis Crossover" is not. Try to avoid trope misuse.