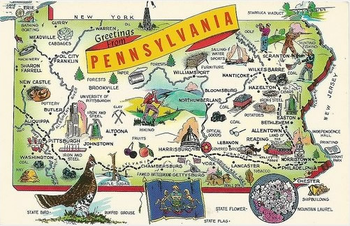 The Keystone State
"Pennsylvania: It's Philadelphia on one side, Pittsburgh on the other side, and Alabama in the middle."
— Old jokenote Often attributed to Democratic strategist James "The Ragin' Cajun" Carville during Bill Clinton's 1992 presidential campaign; however, Carville actually said "Between Paoli and Penn Hills, Pennsylvania is Alabama without the blacks" (Paoli being a western suburb of Philadelphia and Penn Hills an eastern suburb of Pittsburgh).
Advertisement:

Ah, Pennsylvania, one of the original 13 colonies and current sixth most populous state in the union. The "Keystone State"note No relation to the Keystone Army or Cosmic Keystone...hopefully.; or, "The Quaker State". Often referred to by residents as "PA," the state's postal code, expect just about any media taking place here to be focused on the state's largest city of Philadelphia, with the occasional appearance of Pittsburgh. (There is also that one show about office workers which made Scranton, the state's sixth most populous city, nationally known.)

The state was founded by William Penn, a famous Quaker, in 1682 and its name means "Penn's Woods." However, it is not named for William Penn; or rather, it is not named for that William Penn. The land was given to Penn by Charles II in satisfaction of a debt owed to Penn's father, the Royalist Admiral Sir William Penn, for services during the English Civil War; the Quaker son would have preferred to call the territory "Sylvania" (for the woods) or "New Wales" (as many of the Quakers who had signed up to settle there were Welsh), but His Majesty insisted on naming the land after the loyal admiral to whom the debt had been owed. (The Welsh ended up naming a bunch of towns west of Philadelphia, with the area becoming known as the Welsh Tract

.note The colonial origins of the Welsh names of these old towns later meant that having a house in a "Welsh" town was seen as posh in 19th- and early 20th-century Philadelphia high society, so some places gave themselves new Welsh or Welsh-sounding names to heighten their appeal. Of particular note is Berwyn, which renamed itself in 1877 after some hills in Denbighshire for exactly this purpose, and within 20 years had a suburb of Chicago named after it because the Pennsylvania town was known for its beauty. (The Berwyn in Illinois is now substantially larger.))

Benjamin Franklin is likely the most famous resident of Pennsylvania, moving there from Boston as a teenager. Pennsylvania is also well known for its many Amish folk, especially in the south-central parts of the state around Lancaster. (Pronounced "Lank-Ister." You'll immediately out yourself as an out-of-stater if you try to pronounce it "Laan-Caster")

Politically, as with most states, the urban areas of Pennsylvania tend to lean more liberal while the rural areas lean more conservative, with the suburban areas being a battleground. In recent years, this split has resulted in Pennsylvania being one of the most politically competitive states in the nation; its executives are mostly Democrat, its state legislature is majority Republican, its Senate and House delegations are evenly split, and it voted both for and against Donald Trump. Despite the state's long history dating back to the founding of the country, it has only produced two US presidents; the first, James Buchanan, is generally considered to be one of the worst in the country's history at that. Many Pennsylvanians (to their credit) are not proud of him and prefer to point to Thaddeus Stevens (a major Republican figure of the same period and a fairly fire-breathing supporter of equality for Blacks) for the state's contribution to Civil War-era politics. Current President Joe Biden was born in Scranton and lived there (with brief sojourns in Boston and Long Island when he was a toddler) until his father moved the family to Wilmington, Delaware, the state he is most associated with, when he was 11. But since Wilmington is in the Philadelphia metro area and is one of the most Pennsylvania-like places not in Pennsylvania, many say he never really left. note And for what it's worth, while Dwight Eisenhower was born in Texas and raised in Kansas, he and his wife Mamie bought a farm in Gettysburg, Pennsylvania (near Camp Colt, where Eisenhower was given his first command position) after World War II. It was the first home that the Eisenhowers had ever owned, as they moved frequently during his career in the Army, and it was where the couple retired to following his tenure as president and where they both lived until their deaths. Coincidentally, Eisenhower's family was descended from Pennsylvania Dutch settlers.

One area Pennsylvania stands out is the variety and high quality of its food. Philly cheese steaks and hoagies, and Primanti Bros. sandwiches in Pittsburgh, simply must be tried if you are visiting. Philadelphia also has its less well-known but still excellent roast pork sandwiches. The entire state is known for pretzels (the first hard pretzel factory in the country opened in Lititz, a south-cent town, while "B" shaped soft pretzels can be found almost everywhere except for Philadelphia. Philly's pretzels are properly shaped like a French braid, and almost required to be served with brown mustard). Old Forge, a small community 3.5 miles from Scranton, is well regarded statewide for its specific style of pizza (with slices and pies being referred to as "cuts" and "trays" respectively). A wide variety of traditionally German foods (known as "Pennsylvania Dutch") are also popular throughout the state. And that is without even mentioning the chocolate from Hershey (or Just Born, or Whitman's, or Gertrude Hawk...). On top of that, there's a bewildering array of companies making local potato chips; while Herr's, Utz, and Wise have an at least pan-Northeastern distribution, there are several brands that serve just a few counties in the middle of nowhere (e.g. Middleswarth, which serves the central and western parts of the Northern Tier).note You can find Middleswarth elsewhere—there's a cheesesteak cart in Center City Philadelphia that carries Middleswarth products—but only when a buyer has had it shipped specially.

Pennsylvania is also known for being home to many an independent Amusement Park, a tradition that dates back to the late 19th century when most of them were tiny "trolley parks". Some of these parks, like Knoebels and Waldameer, are relatively small family-owned establishments that offer free admission, charging fees only for their handful of world-class rides. Lakemont Park is home to "Leap-The-Dips", the oldest roller coaster still in operation (opened in 1902). Other once-small parks like Kennywood, Dorney Park (currently owned by Cedar Fair Entertainment), and especially Hersheypark (initially founded by the chocolate factory owner for his employees) have grown into massive tourist destinations. Oh, and there's also Sesame Place, a children's Theme Park for Sesame Street near Philly that's owned by SeaWorld.

Most of Pennsylvania, save for its northwestern and southeastern corners, is part of Appalachia. Indeed, Pittsburgh is the largest city in the region. See that page for more details on its geographic and cultural peculiarities.

Regions of Pennsylvania (by order of largest city):