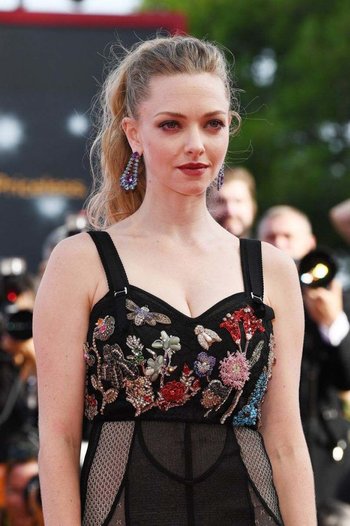 Amanda Michelle Seyfried (born December 3, 1985 in Allentown, Pennsylvania) is an American actor and former child model. Before her movie career started in earnest she was known for her roles as murder victim Lily Kane in Veronica Mars and Sarah Henrickson on the HBO drama series Big Love. Filmwise, she has starred as Sophie Sheridan in the feature film Mamma Mia!, and Karen Smith in Mean Girls.

In 2009, she appeared in the supernatural horror comedy Jennifer's Body. To give you an idea of how warped that movie was, Seyfried was the Hollywood Homely best friend of Jennifer (played by Megan Fox).

In 2010, she played the title role in Chloe, by Atom Egoyan. 2011 saw her playing the lead in Catherine Hardwicke's Red Riding Hood and starring opposite Justin Timberlake in In Time. She's recently garnered critical acclaim for her role as Cosette in the film adaptation of Les Miserables. She has collaborated with Seth MacFarlane on comedies such as Ted 2 and A Million Ways to Die in the West. She's married to fellow actor Thomas Sadoski, giving birth to their first child, a daughter named Nina, in 2017. They later had a son in September 2020.

Her television roles include: