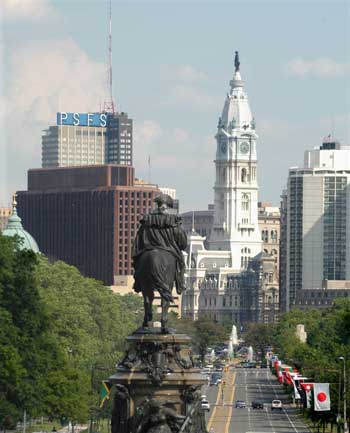 The view down the Ben Franklin Parkway from the Philadelphia Museum of Art. Statues of William Penn (distance, atop City Hall) and George Washington (foreground) overlook the city; the iconic Loewe's Hotel (the former PSFS Building) is to the left.
"We’re goin' hoppin’
We're goin' hoppin’ today
Where things are poppin’
The Philadelphia way
We’re gonna drop in
On all the music they play
On the bandstand"
— Barry Manilow, "Bandstand Boogie"note Music by Charles Albertine; lyrics by Manilow and Bruce Sussman

Philadelphia is the largest city in Pennsylvania and sixth largest in the United States, as well as the second-largest on the East Coast and the second-densest with a population greater than 1,000,000 (after New York City in both cases — how did you guess?). Literally translated from the Greek its name means "The City of Brotherly Love," which is naturally its nickname. This is known as either irony considering the city's high murder rate, or Truth in Television; brothers fight, they say mean things about each other, but you'll have to search long and hard to find another city that is so beloved by its inhabitants.

The city was founded on October 27, 1682 by William Penn. A statue of him sits on top of City Hall, now eclipsed by Three Logan Square, Liberty Place, the Comcast Center, and the Comcast Technology Center in height. It should be noted that another statuette of Penn sits atop the Comcast Center, and that within a few months of the building's completion with Penn atop it, the Phillies won the World Series. Take that as you will. It was the city where the Continental Congress met, and the Liberty Bell is kept there. Until Washington, D.C. was built, it was (usually

Philadelphia is notable for being the largest city in the country having a healthy Black middle-class. From the poshness of Rittenhouse Square, to the maze-like quasi-melting pot that is South Philly, to the bohemian artists *cough*hipsters*cough* of Northern Liberties, to the hard knocks of North Philly and parts of the Southwest, to the strange blend of professors and students, immigrants, and poor folk who inhabit West Philly, to the quaint tree-lined streets of the towns-within-a-city of the hilly Northwest, to the suburban sprawl of the "Great Northeast," to the unparalleled richness of history that is Old City, Philadelphia has everything one could ask for in its many neighborhoods. It has been a very large city for a long, long time. In the years before The American Revolution, it was the second largest English-speaking city in the world, after London.

The city is famous for its cheesesteak sandwiches (known outside the city as "Philly cheesesteaks"). It's probably best if you just call them "cheesesteaks" or just "steaks"— anything else will get you laughed at by a native.note This being Philadelphia, of course, just about anything can get you laughed at by a native, but whatever You may have heard that there is special lingo for ordering steaks; this is technically true, but only really used at a few restaurants (including the "originals"—now heavily marketed to tourists—Pat's and Geno's). Sub sandwiches are popular in Philly as well, and locally they are referred to as hoagies. You can get them from small sandwich shops or from Wawa, a very popular convenience store chain in the region. The city is also famous for its soft pretzels, which are narrow and S-shaped and produced in chains you break your pretzel off from; you eat it with brown mustard, thankyouverymuch. Its culinary delights also extend to its two major markets: the Italian Market on S. 9th St. in South Philly, home to old-fashioned red-gravy Italian-American food,note And some updated fine-dining Sicilian food and also a number of Latin American restaurants, but nobody ever talks about those various Italian specialty shops, and cheap meat and produce; and the Reading Terminal Market in Center City, home to all manner of lunch restaurants, the Pennsylvania Dutchnote who run their own restaurant called Dutch Eating Place; if you eat there, remember that "chicken pot pie" means "chicken noodle soup" (making it one of the few places you're likely to see an Amish person or Mennonite in homespun operating a credit-card reader), and more expensive meat and produce. Another popular food in Philly is crab fries, especially from Chickie & Pete's, served with cheese dip. A popular dessert is Italian ices, especially from Rita's, referred to locally as water ice after its slushy texture.

Philly is also famous for being the birthplace of things like the Declaration of Independence, modern democracy, and the computer.

Philadelphia is also a very culturally rich city, with its world-class orchestra and the oldest still-operating opera house and theater in America all along, or right off of, the Avenue of the Arts (a.k.a. South Broad Street north of Lombard Street); and many world-class museums dotting the beautiful vista of the Benjamin Franklin Parkway. The city is also home to a number of theaters; as well as the weirdly wonderful, sequin-and-feather-filled Mummers Parade every New Year's Day note and Philly's not giving that up. Budget constraints have led to more private funding for the parade, but it's not going anywhere. There'd be a general outcry. And don't forget it has the first zoo, the first free library system, and the first Catholic school system in the country. The city is also known for its neoclassical architecture and its huge number of public murals, for which even the city's graffiti artists hold a healthy respect and generally will not tag (the few taggers who deface the murals lose the respect of other taggers...after being given a shit-kicking if found).

The residents, when it comes to sports, are infamous for being extremely outspoken about their beloved teams. There have been a couple of incidents involving famous ad campaign figures in the past that have turned into the city's own Never Live It Down moment. It doesn't help that some in the city and particularly the city's media like reliving those particular moments. While criticism about the tendency to react vocally (booing in crowds, sarcasm and snide comments individually) certainly has been well earned, the city itself has not had any more incidents than any other city. (Admittedly, the last couple of years when Veterans Stadium was in operation, they actually had a court in the basement simply because of the sheer number of law-breakers at Eagles games.) This even extends to pseudo-sports, as quite a few notable wrestling promotions (most notably Ring of Honor and the defunct ECW) are based in Philadelphia, and most of them attract rowdy, loud, and obnoxious crowds. Philadelphia and her inhabitants are very vocal about their criticism or disdain, even to their own sports teams; and if you go into their city with a bad show, you'll hear it straight from the viewers. Also, they seem to have a problem with naming their hockey/basketball stadium- built as a replacement for the old Spectrum (since razed), it was first named CoreStates Center, after a local bank. Then that bank got bought out, and was renamed to First Union Center. They merged with another bank, hence becoming Wachovia Center. Then Wachovia was bought out by Wells Fargo of California, so it's now Wells Fargo Center.

On a less negative note, there was Harry Kalas. His death hit the entire city hard, showing that even if Philly fans show it in negative ways, they really do love their sports teams and the people who keep them connected. Even a lot of those residents who don't really like sports will admit this much.

Then came Super Bowl LII in 2018, where the Eagles triumphed over the Patriots in a nail biter of a game, avenging their Super Bowl XXXIX loss to them from 2005. The celebrations started immediately with people rushing to the streets, screaming and marching, honking car horns, and climbing poles. It was a true testament to how much a victory really meant to the city of Philadelphia.

There is a distinct Philadelphia accent spoken by natives. By far the most famous feature of the Philly accent is that water is pronounced as "wooder." There are some flat vowel sounds in there, such as the "ow" sound being replaced by a flat "A" sound so "towel" is pronounced as "tal," and the "H" sound is frequently dropped (for example, "huge" sounds like "yuge"). There is a clipped, percussive inflection, as well as the usual Mid-Atlantic distinction between words like "caught" vs. "cot." Another notable feature is that "Eagles" is pronounced like "Iggles." Also, be prepared to hear someone refer to a group of people as "yous." There are slight variations throughout the city and its metropolitan area, with notable variants including South Philly, Northeast Philly, and neighboring areas of Delco and South Jersey.

Special note should be made in regards to Benjamin Franklin, sometimes called Philly's Favorite Son — which is odd, 'cause he was born in Boston. However, Franklin lived here for most of his long life (insanely long, by the standards of the time, toonote He lived to the ripe old age of 84, which wouldn't be bad even today for someone who had been overweight since at least his 40s, suffered from gout, and had every venereal disease known to man at the time), and he left an indelible mark on Philadelphia's history: considered to have established the first modern newspaper here, America's first library here, the first fire company in Pennsylvania (which was also the most modern at the time), discovered electricity here, and invented the lightning rod, bifocals, the Franklin stove, the odometer, and the glass armonica here. According to The Other Wiki, "A noted polymath, Franklin was a leading author, printer, political theorist, politician, postmaster, scientist, musician, inventor, satirist, civic activist, statesman, and diplomat." Oh, and he was one of the Founding Fathers; in fact, The American Revolution was arguably won because he was on our side. Among the large number of contributions he made to the Colonial effort, it was Franklin's convincing the French to become involved in the war which ensured the Victory at Yorktown, and ultimately proved to England it wasn't worth it to continue fighting the colonies. Finally, he was a well known ladies' man, even after he got rolly-polly. Philadelphia was already a large, rich, port city before him, but Franklin is largely credited -- true or not -- with making Philadelphia the most powerful city in the Colonies, economically, socially, and politically. In summation, our boy Ben was nothing short of the biggest badasses in American history (and yet we named a bridge to Camden after him...note Well you did call him a badass).

For whatever reason, it's something of a cliche in Westerns that the City Slicker is almost always from Philadelphia.

Note: This list includes people from the City of Philadelphia, but also the four surrounding Pennsylvania counties traditionally included in the Philadelphia metro area (Delaware, Montgomery, Bucks, and Chester). Famous Pennsylvanians from Southeast PA but not the immediate Philadelphia area (e.g. from Berks County/Reading) should go on the Pennsylvania page.