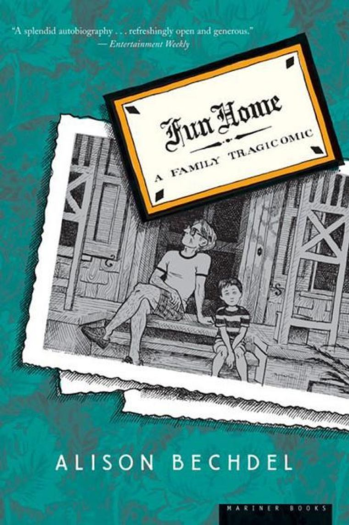 Caption: My dad and I both grew up in the same, small Pennsylvania town. And he was gay, and I was gay. And he killed himself. And I... became a lesbian cartoonist.
— Welcome to Our House on Maple Avenue
Advertisement:

Fun Home is a 2006 comic memoir by Alison Bechdel, creator of Dykes to Watch Out For. The story focuses on her growing up in rural Pennsylvania, living under her oppressive father, Bruce, a high-school teacher and funeral home director. It also focuses on his history, how he came to be, and his lifelong project of restoring a dilapidated Victorian-era mansion. As she asserts her independence and comes to accept her orientation as a lesbian, she discovers that her father is gay and closeted. Soon after Alison comes out, he is hit by a truck, which she believes to have been suicide.

The book took seven years to make. The art was painstakingly reconstructed from family photographs, alongside the panels Alison herself posed for.

The book was followed up by Are You My Mother? which deals with Alison's relationship with her mother.

It was eventually adapted into a musical of the same name, which premiered on Broadway in 2015.