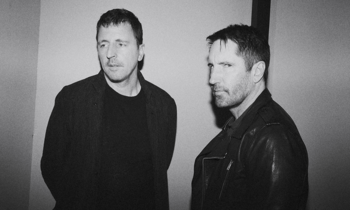 "I am home... I believe."note Ross on the left, Reznor on the right.
Influences:
Advertisement:
"When an instrument fails on stage, it mocks you and must be destroyed."
—Trent Reznor

Arguably one of the most essential acts in Industrial Metal, Nine Inch Nails is an American rock band that's been rolling around the musical scene since 1988.

NIN is somewhat somewhat unusual in that for nearly three decades, it was essentially one man, Trent Reznor, who was doing all of it. The first official member to be added to the lineup since the project's inception was long-time collaborator Atticus Ross, who was inducted in late 2016. Most members have come and gone, occasionally contributing to albums but mostly staying for the live shows (one such member, Richard Patrick, has struck out on his own and formed a little band you might've heard of called Filter).

The discography, once a noisy gauntlet of 90s alt-rock and industrial metal, has become exceedingly varied over the years, from ear-destroying screaming guitar death on Broken to beautiful, mellow piano pieces on Still, to the groovy sound of bass and saxophone that lines much of Hesitation Marks and all kinds of twisted sounds in between; but most of it falls squarely under True Art Is Angsty.

Their visuals are also known for being forward-thinking in all senses of the phrase, with the band releasing music videos which have ranged from politically subversive to the sort of video which answers the question: "What if Hostel had been a set for music videos?"

In contrast to his highly brutal industrial rock output, Reznor in person is very active in his community and generally a pretty nice guy (if not provoked). Also in the same vein, he was very close with Tori Amos — he even sang backing vocals on one of her songs (the past tense is Courtney Love's fault).

Reznor's also worked on different musical ventures, namely How to Destroy Angels (a supergroup with longtime NIN collaborator Rob Sheridan and Reznor's wife Mariqueen Maandig) as well as a now-cemented venture into score composition. Along with Atticus Ross, Reznor has handled scores for various films and TV series, becoming David Fincher's associated composers ever since their initial collaboration with The Social Network, as well as branching out to the unexpected with, of all things, a score for a Pixar film (Soul). Reznor also provided the soundtrack to Quake and recorded tracks for Doom³ that didn't make it into the final game, although they can still be found in the game files, while the former bandmate Chris Vrenna has also struck out as a notable composer, aiding Reznor with the Quake soundtrack and making music for Doom 3, American McGee's Alice and Quake Champions.