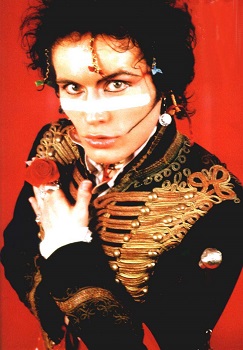 "I really knew I wanted to be Adam, because Adam was the first man. Ant I chose because, if there's a nuclear explosion, the ants will survive."
Advertisement:

Adam Ant is an English musician and actor, best known for his work in the band Adam and the Ants. Born Stuart Leslie Goddard on November 3, 1957, he took on this new persona after a failed suicide attempt. He'd been in some little-known bands previously, including Bazooka Joe, and The B-Sides. But after becoming Adam, he formed The Ants, and went on to achieve international success.

Ant has also had several acting roles, including Jubilee (1978) and World Gone Wild.

Adam and the AntsAdam Ant