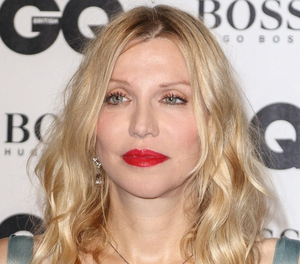 She moved around a lot in The '80s and was in various bands. At one point she joined Faith No More as a temporary vocalist, but was kicked out for (surprise) clashing too much with the other musicians. Along with guitarist Eric Erlandson, she started Hole in 1989, which has/had an alarming inability to hang onto drummers and bass players. With Hole she made the following albums:

Love disbanded Hole circa 2002 after a period of inactivity, and became more known for erratic behavior and insulting other alt-rock musicians than her music. She did not endear herself to Nirvana fans by provoking a legal pissing match with Dave Grohl and Krist Novoselic, delaying the release of the With the Lights Out box set for three years.

In 2004, Love recorded a solo album, America's Sweetheart (2004). This was not as well-received as her Hole material due to the weaker songwriting and overly commercial production, and even she admitted she was mostly out of it during recording. This album featured Emilie Autumn, and launched her non-classical career. In 2009, she revived Hole with an entirely new lineup, annoying Erlandson and Auf Der Maur, since they only learned about it from Love's announcement. (The latter was baffled by the announcement saying she would be the bassist.) This lineup (Love, Micko Larkin, Shawn Dailey and Stu Fisher) put out a new album, Nobody's Daughter (2010). The album receives very, very mixed reviews. Fisher left a year after the release, being replaced with Scott Lipps. Hole disbanded a second time in 2012, and Love is again a solo act, touring with people like Lana Del Rey.

After some bit parts in the late 80s, she had a relatively successful period of acting in the mid 90s to early 2000s, most notably in The People vs. Larry Flynt, where she won quite a few awards and even managed to impress Roger Ebert. Yes, she's perpetually name-droppy, but in reality she's always seemed to be privy to a lot of insider information. "If Harvey Weinstein invites you to a party at the Four Seasons, don't go." Everyone laughed this off. No big deal, Courtney’s crazy! Then she got blacklisted by her talent agency.note There is also an interview with Howard Stern where she hinted—but fell far short of revealing too much—about David Bowie's illness.

"I told you from the start just how this would end..."