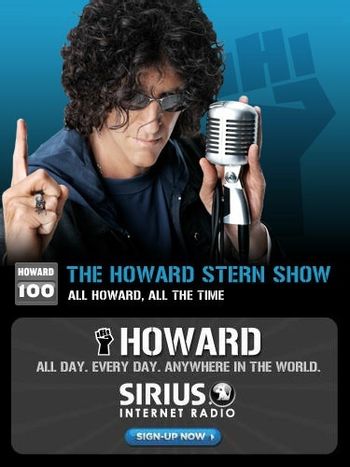 "Hey Now!"
"Never before has a man done so much with so little."
—Tagline to his biopic Private Parts
Advertisement:

Howard Allan Stern. What can you say that hasn't already been said about him, or more likely, by him. Born January 12, 1954, Stern went from being a poor Jewish kid living in a bad neighborhood on Long Island, New York, to eventually becoming one of the highest rated and highest paid radio personalities of all time. Also known as the self-proclaimed King of All Media (a title he gave himself to parody Michael Jackson being dubbed The King of Pop).

With a career spanning over 30 years, Stern has written two books (both of which topped the New York Times Best Seller list within weeks of their release), starred in the autobiographical film of his life, aptly named Howard Stern's Private Parts, (it too opened at number one at the box office), and produced and or starred in numerous successful late night television shows and pay per view specials, most of which also had high selling video releases. Oh yeah, taking place during all the previously mentioned accomplishments, Stern and his four hour, five day a week radio show were also almost always the number one syndicated radio program during morning drive in most major radio markets in The United States for nearly fifteen years.

Stern's syndicated radio show, The Howard Stern Show, has run from 1982 until present day, but the start date could be placed earlier if his college radio career is factored in, and his show didn't actually start syndication until the early 1990's. Regardless, Stern's show was instrumental in breaking down many barriers in radio by deviating from regular talk and corny morning routines, instead focusing on entertaining and comedic political, pop culture, and news commentary. The show was also groundbreaking in that it was one of the first mainstream media outlets to approach many of the time's taboo subjects, including but not limited to homosexuals, gross-out jokes, sex workers, and disabled (or just plain weird) sideshow-style characters.

The show was also groundbreaking as a precursor to Reality TV. From the beginning of his career, Stern has always found an interest in studying and interviewing any and all of the normally "behind the scenes" people that he's worked with in radio and TV, including his fans. Many of these people become permanent characters or fixtures on the show, and in this sense, it's been said that Stern "can make anybody famous," due to his ability to get entertaining, and sometimes very unknown, facts and stories out of just about anybody he interviews. Barbara Walters herself has been quoted as calling him "one of the greatest interviews of our generation."

Mainstream media often describe him as a "shock jock" due to the sometimes sexual and graphic nature of his social commentary and radio segments, yet Stern counters that he never had the wish to "shock people", just to "help people get through their hard days by being entertaining and honest".

Aside from being one of the highest rated Radio DJ's of all time, Stern is also one of the most fined. As far back as 1986, Stern was in constant battle with The Federal Communications Commission, pushing the limits of free speech and what could and could not be broadcast over radio airwaves. In late 2005, Stern left terrestrial radio (governed by the FCC) to instead do his show on Sirius XM Satellite Radio (free of government censorship). The switch followed indecent comments Stern made that combined with those from others, cost his former employer Viacom a whopping $3.5 million in a voluntary payment to the FCC to settle FCC-sanctioned investigations and avoid fines. No longer one of the highest rated radio personalities due to the number or people with access to satellite radio compared to terrestrial radio, he is however now officially the highest paid.

Due to the controversial nature of his show, Stern can be a polarizing figure. There's almost no middle ground opinions about him. There are rich, poor, conservative, liberal, and people of all different ages, races, and nationalities from around the world that believe him to be a very prolific and entertaining satirist, and there are just as many people in all those categories that believe him to be nothing short of a sleazy, foul-mouthed, bigoted antichrist. Regardless of whether you actually like him and his show, Stern has often been quoted as saying "I just care whether they listen or not."

Currently available only on Sirius XM Satellite Radio, and broadcast out of New York, the show runs from 6:00 am until 10:00 am, sometimes as late as 12 noon. His official website, which includes pictures and daily summaries of his radio show, is here

Howard has appeared in the following media:

Howard Stern or his creations provide examples of: