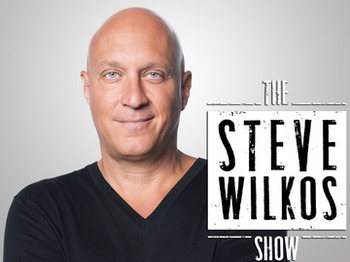 Don't get too used to him smiling.
"GET OFF MY STAGE!"
— Steve Wilkos, at least Once an Episode
Advertisement:

The Steve Wilkos Show is a syndicated daytime Talk Show that debuted on September 10, 2007 and is distributed by NBCUniversal Television Distribution.

After serving as director of security on The Jerry Springer Show from 1994 to 2007, Steve Wilkos, a former U.S. Marine and Chicago police officer, was given a show of his own after subbing for Springer himself on several occasions (such as during Springer's stint as a contestant on the third season of Dancing with the Stars), which led Wilkos to gain a fan following, particularly because of the special "Steve to the Rescue"-themed episodes.

Though it is part of the "tabloid/conflict talk" genre, and Springer serves as one of its co-executive producers, to say that Wilkos' show is Darker and Edgier than Springer is just a bit of an understatement. In addition to polygraphing suspected cheaters, confronting controlling partners and running DNA tests that have become commonplace in the genre, Wilkos confronts and polygraphs accused rapists, pedophiles, child abusers, and even murderers on his show. In addition to not letting an accused guest sit down, Wilkos quite often tosses that guest's chair aside or smashes it altogether, and will tear into said guest upon their guilt being confirmed before instructing them to leave his stage/studio.

The show's 14th season premiered on October 5, 2020. Due to the COVID-19 pandemic, the 14th season has no studio audience; Wilkos and guests are either physically distanced on set or communicate via teleconference, and a number of episodes involve updating past stories as opposed to new cases.

GET THE HELL OFF MY TROPES!