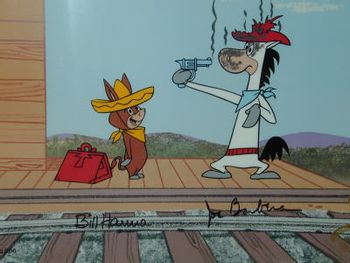 Watch where you point that thing.
"Why did Quick-Draw McGraw hang around with that freaky little mule?"
—Trent Lane, Daria
Advertisement:

Yet another Funny Animal omnibus series from Hanna-Barbera, Quick Draw McGraw followed the adventures of the equine sheriff with an exaggerated southern drawl, who upheld law and order in The Wild West with the aid of Baba Looey, a Mexican burro with a Spanish accent, and Snuffles, a biscuit-mooching dog. Whenever Baba Looey questioned his partner's motives, Quick Draw uttered his Catchphrase: "Hold on thar, Baba Looey! I'll do the thin'in' around here, and dooon't you for-git it!" Upon which hilarity ensued.

Hoooold on, thar! This series provides examples of: