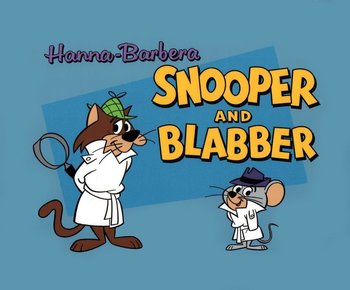 Snooper and Blabber was one of the backing segments for Quick Draw McGraw, featuring the comical adventures of a cat and mouse team of detectives. Super Snooper (the cat) is the lead character with Blabber Mouse (the mouse) assisting him. Together, they tackle whatever cases come their way, leading them into one wacky misadventure after another.

After their original shorts ended, Snooper and Blabber appeared in a number of other Hanna-Barbera productions, including Laff-A-Lympics, Yogi's Treasure Hunt, Yo Yogi!, the Super Secret Secret Squirrel segment of 2 Stupid Dogs, and Jellystone!.