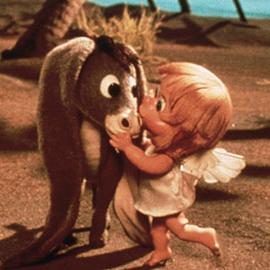 Nestor, The Long-Eared Christmas Donkey is a Christmas Special produced in Stop Motion puppet animation (called "Animagic") by Rankin/Bass Productions and based on the song of the same title by Gene Autry, Don Pfrimmer and Dave Burgess. It was first aired in 1977.

The film is narrated by Santa Claus's donkey, Speiltoe, voiced by country singer Roger Miller. He tells the tale of his ancestor, a donkey with abnormally long ears named Nestor, who lived in the days of The Roman Empire. Every animal in the stable disliked Nestor because of his ears, and they inadvertently lead to his exile from his farm. After losing his mother, Nestor makes a great, perilous journey with the help of a cherub, and soon goes to fulfill his destiny as an integral part in the birth of Jesus Himself.

Compare with Disney's theatrical release The Small One for a somewhat similar premise.