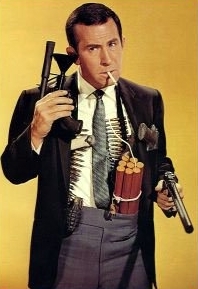 Hopefully, he'll get smart.
"Why must the fate of the world always end up in the hands of an idiot?"
— Grim, The Grim Adventures of Billy & Mandy
Advertisement:

The Idiot Hero is a common character in action series. Often, they are both The Protagonist and the central character of the narrative. They will frequently use the Indy Ploy, will be too stupid to be afraid of imminent peril, and will often have a short memory span. Despite all of this, they are the most effective member of the cast at fighting. They will also usually be the leader of a tight-knit group of characters, despite the fact they don't have the brains to lead a cat out of a paper bag. This is because they are so stupid as to be incorruptible, and has the ability to maintain a childlike innocence and faith in people that inspires those around them.

The Idiot Hero comes in many breeds, like The Fool. The most common variation, known as the Stock Shōnen Hero, usually has some idealistic goal in mind. It is usually becoming the "best warrior ever", and is usually much more aggressive when irked. Such a hero/heroine usually enjoys fighting, and is always looking for a challenge. The only way to actually anger this kind of Idiot Hero will be inevitably to hurt one of their friends, or Innocent Bystanders. In some cases, their idiocy may become the best weapon to ruin an evil plan inadvertently.

Tends to overlap with Small Steps Hero (or Heroine), being too lacking in ambition or easily distracted to plan anything truly long-term. In their early stages, they may be little more than an Invincible Incompetent; however, with Character Development, the Idiot Hero may mature into a Messianic Archetype. The Idiot Hero is usually opposed or rivaled by The Stoic or the Aloof Big Brother (or Sister). If the Idiot Hero is not nearly as aloof when things get serious, then their stupidity is actually an Obfuscating Stupidity.

The Lancer to the Idiot Hero takes two common forms: either they are a Hero-Worshipper willing to look past their obvious drawbacks, or a Sour Supporter who acts as his Foil. In either case, they often act as Mr. Exposition (or Ms. Exposition), explaining the hero/heroine things they really ought to already know. Their other True Companions will usually get annoyed or even outright be embarrassed by their presence. But deep down, they know they are the one whom they can depend on to protect them from the evils of the world.

Does not necessarily star in an Idiot Plot.

Compare with All-Loving Hero (or Heroine), Failure Hero (or Heroine), Nice Job Breaking It, Hero, Hero with an F in Good, Good Is Dumb, Stupid Good, and Butt-Monkey. Contrast with Pragmatic Hero, Guile Hero (or Heroine), and Byronic Hero (or Heroine). Will frequently be a Manchild (or Womanchild) — or even a Psychopathic Manchild (or Womanchild) if crossed with Sociopathic Hero. However, that would border on an outright Deconstruction of the archetype. Can also result in the Idiot Hero being Unintentionally Karmic to the villain if the villainous plans are foiled because of the ill-fated results of their attempts to give the bad guy friendship or Unwanted Assistance. Genuine competency over standing idiocy makes a Bunny-Ears Lawyer.

Could naturally emerge in Tabletop RPGs as a form of Min-Maxing, where the hero/heroine sacrifices intelligence (or at least its non-combat related aspects) for better ability to fight.

Not to Be Confused with Idiot Hair, though the two may overlap.

As Son Goku arrives to square off against the evil Freeza, the latter realizes how frustratingly stupid his next opponent is.

As Son Goku arrives to square off against the evil Freeza, the latter realizes how frustratingly stupid his next opponent is.