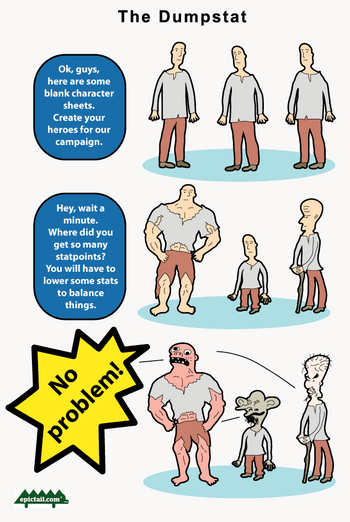 A Dump Stat is a phenomenon that occurs in games which involve multiple attributes for your characters and allow you to customize those attributes in some fashion. This is the stat that you put your lowest score in, or else don't spend any points on at all.

This can occur for multiple reasons:

Sometimes, this is deliberate; the game has a class system or a limited number points to put into your character, forcing a degree of specialization. In this case, the dump stat isn't necessarily a bad stat, but is overshadowed by more suitable ones for a particular build. A warrior wielding a greataxe may find little use in a Dexterity stat, but an archer will rely on it.

Sometimes this is due to poor game design. Ideally, all of your customization options should have some use beyond "flavor". Another common cause is that a game system is designed to handle multiple facets of gameplay, but the game itself only encompasses a few of those facets. If your party ever went into town to barter instead of trawling the depths of this dark dungeon, maybe your Barter stat would see some use.

Another common reason for this is that a game engine has been copied over from a tabletop game to a digital game verbatim. In games where Charisma only affects conversations, it's really damn hard to make it translate well when your interaction with NPCs is suddenly governed by cold, unfeeling dialogue trees instead of a reactive and creative game master.

Another common cause of dump stats is tweaks to the game system during testing. Initially, maybe Diplomacy was wicked awesome; however, it let a savvy player win the game in ten minutes without lifting a finger. Unfortunately, when they scaled the skill back enough to prevent that contingency, they also scaled back the completely reasonable uses of the skill to the point where it's not worth using in any situation. This occurs frequently in game testing because some powers don't scale well; putting a few points into the skill works as intended, but putting all of your points into the skill breaks the game. Diminishing returns are really hard to balance and, honestly, how many bored players are going to choose to go through your high-octane first person shooter with maximized Basket Weaving anyway?

Not to be confused with "the stat you dump all your points into": that's One Stat to Rule Them All (also often referred to as the God Stat).

Depending on the game system, Useless Useful Non-Combat Abilities can fit under this trope as well, if you're expected to distribute points among various character skills which aren't all equally useful.

As testing progresses, it becomes clear that focusing too much on one stat is dangerous, as it causes the player's other stats to weaken. The players who focused on mental stats start to quickly lose muscle mass, while those focused on physical stats have their IQ drop. Shortly after, every player becomes stupid, even Warlock and Cleric, due to Warlock's lack of wisdom (the subject has near-perfect memory, but is terrible at logic) and Cleric's lack of intelligence (the subject has extremely limited long-term memory). The physical characters start to experience Body Horror as Barbarian's muscles become larger than his skin can contain, while Knight's skin becomes solid, requiring lacerations to be made with a diamond-bladed jigsaw so he can move.