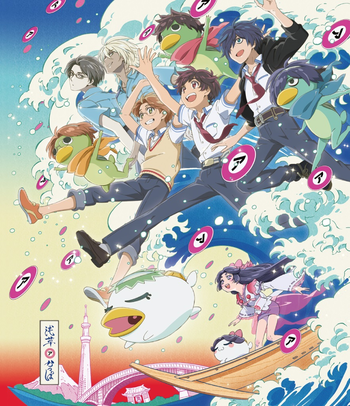 The stage is Asakusa.

One day, three second-year middle school students — Kazuki Yasaka, Tooi Kuji, and Enta Jinnai — meet a Kappa-like creature named Keppi, who is the self-proclaimed heir to the throne of Kappa Kingdom. When they anger Keppi by accident, Keppi forcibly takes the students' shirikodama (a mythical organ kappa steal through a person's anus) and they are transformed into kappa. Keppi informs them, "If you want to return to your former selves, you need to connect in 'that way' and you must bring me the shirikodama of zombies." If they do this for him, he will give them Dishes of Hope, which will grant the boys' wishes. Will the three boys be able to connect and take the shirikodama of zombies? At the same time, two policemen, Reo Niiboshi and Mabu Akutsu, interrogate suspects of widely reported crimes at the police box where they are stationed that have mysterious origins.

Sarazanmai (さらざんまい in Japanese) is an original 2019 anime by Kunihiko Ikuhara of Revolutionary Girl Utena fame and joint-animated by MAPPA and Lapin Track. It has character designs by Migi and it is regarded as his first anime to center on male protagonistsnote  Though it can be argued that the true proactive protagonists of Penguindrum were male, the story focus was primarily on the heroine Himari, something he has stated he wanted to do for a long time until an idea was finally greenlit.

It premiered in April 2019 on FujiTv’s Noitamina block in Japan, and is available for streaming on Crunchyroll and Funimation.

It has a spin-off Manga by Misaki Saitō, titled Reo to Mabu: Futari wa Sarazanmai (レオとマブ～ふたりはさらざんまい～ in Japanese) that takes place before the events of the anime. It centers on characters Reo, Mabu and a baby version of Sara and was published in Boys' Love magazine Rutile Sweet with releases up until the anime’s premiere. A proper adaptation of the anime, made by the character designer, was released in 2019.

The series also has a two volume light novel available, which gives a bit more context into the motivations of the characters. The writing team admitted that some of the content was also things they couldn't fit into the show proper.

You can watch the trailers for the anime here