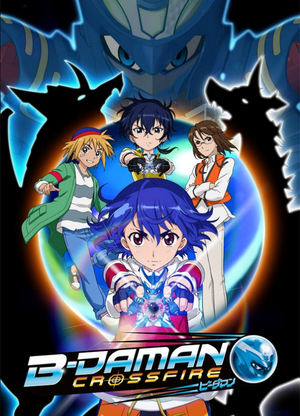 B-Daman Crossfire is an anime series about a boy named Riki Ryugasaki who gets ahold of a rare talking B-Daman, a blue dragon named Dracyan. This allows him to join an underground society of B-Shots and participate in their high level tournaments, as well as make a lot of friends in the process. However, some B-Shots are plotting to use their special B-Damans to rule the world, and only Riki and other B-Shots with dragon B-Damans can stop them.

The English version, which combined two quarter-hour episodes into one half-hour show, was first aired on The CW's Vortexx. It was the franchise's second chance in America since the other series that made it to the states did rather poorly there.

Was followed by B-Daman Fireblast, which premiered in North America in 2015 through the official app.