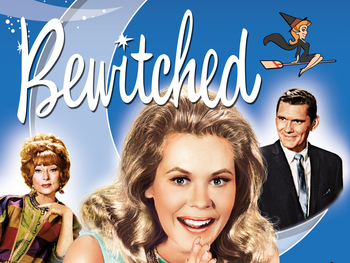 "So my wife's a witch. Every married man has to make some adjustment."
— Darrin Stephens
Advertisement:

Bewitched is a Sitcom/Fantastic Comedy series which was broadcast for eight seasons on ABC from 1964 to 1972, and took a light-hearted look at the supernatural.

Elizabeth Montgomery stars as Samantha, the wife of ad executive Darrin Stephens. She's not the average housewife. In fact, she's a witch, with the power to warp reality as she sees fit. After she revealed the truth about herself to Darrin on their wedding night, Samantha promised him to suppress her powers and try to live a normal life, but she can't help using her powers when she or Darrin are in a jam. With a twitch of the nose, she can make something magical happen and throw Darrin and the rest of the mortal world into a tizzy.

While Samantha generally abstained from magic as per her husband's wishes, her family felt no such loyalty. Witches and warlocks popped into Sam's life on a regular basis, and gleefully mucked up the lives of mortals, both intentionally and unintentionally. Not helping was the fact that all of them wanted Sam to forsake the mortal life for full-time witchcraft. Endora was Samantha's mother and the ultimate vicious mother-in-law, not thinking much of mortals like Darrin. Endora was the most common instigator of plots, and trying to reverse one of her spells before any mortals found out was often the driving force for a given episode. Maurice was Samantha's father, and the rest of the magical family included practical-joking Uncle Arthur, fun-loving Serena and forgetful Aunt Clara. Esmeralda was added later in the show's run as a slightly inept witch housekeeper. She was a timid soul and would vanish into thin air if addressed in a harsh tone. A physician character, Dr. Bombay, was added to the show in 1967.

A frequent unintentional witness to Samantha's magical antics was Larry Tate, Darrin's boss. Among the other inhabitants of this bewitched world were Larry's wife, Louise, and the Stephens' next-door neighbors, the Kravitzes, nosy Gladys and long-suffering Abner. Samantha and Darrin would later have two children, Tabitha (spelled Tabatha in the credits until Season Five) and Adam. Tabitha had her mother's powers, but Adam seemed to be mortal (much to Darrin's relief) until he developed them near the very end of the series.

The show, which could have been forgettable fluff in lighter hands, was buoyed by intelligent writing and sharp performances, and as a result, Bewitched became a favorite with critics and audiences and even won a few Emmys.

Over the years, many people have criticized Darrin's hatred of magic, but not all of it came from his reactionary fear of non-conformity; he also could never have survived in Samantha's world due to his lack of magical powers. The first time he met Samantha's mother, she threatened to kill him, and the first time he met Samantha's father, he did kill him — but Samantha persuaded her father to bring Darrin back to life a few minutes later. It would only take a slight change in approach to make most of the Bewitched storylines into terrifying horror stories. Yet through all the hexes and curses and involuntary shapeshifts, Darrin remained loyal to Samantha, and vice versa.

The tension between the mortal and supernatural worlds, and Samantha's precarious balancing act between the two, formed the backbone of all the episodes. On any given episode, Samantha might try to keep the peace with her father when he discovered Darrin was a mortal, or Endora might decide Darrin needed a sense of humor and put a hex on him to make him crack jokes uncontrollably. These premises might have seemed simple on the surface, but they quickly achieved complexity when worked through the show's intricate web of character relationships, and just about always ended on a lesson about accepting one's family, no matter how bizarre or embarrassing they may be.

The show's scripts were always solid and utilized a consistently high level of imagination when working the supernatural elements into the story. In one show, Esmerelda was asked to make a Caesar salad and accidentally conjured up Julius Caesar himself. The show's ensemble was tight and funny, and their across-the-board chemistry both brought the stories to life and made the material believable. The show also had a rare consistency of style and tone, thanks to the fact that the show had one regular producer and director, William Asher, to guide the actors through their paces. It is interesting to note that Mr. Asher was the real-life husband of Elizabeth Montgomery, Samantha Stephens herself.

Bewitched experienced many casting changes during its long run. Kasey Rogers replaced Irene Vernon as Louise Tate in 1966, and Sandra Gould replaced Alice Pearce as Gladys Kravitz the same year. Tabitha was played by no fewer than three sets of twins: Heidi and Laura Gentry and Tamar and Julie Young all played Tabitha throughout much of 1966, but were replaced permanently by the duo of Erin and Diane Murphy. (Eventually Erin Murphy took over the role entirely.) But the most noticeable replacement (and one of the most famous in TV history) occurred in 1969 when Dick Sargent replaced an ailing Dick York as Darrin. Usually having multiple changes like these are detrimental to a show's quality, but Bewitched managed to weather all the changes with nary a hair out of place.

The show ended its run in July 1972 after eight seasons, having won Emmys for Asher's direction and Marion Lorne's performance as Aunt Clara. Montgomery was nominated five times for her work as Samantha, but never won. Just the same, she will always be remembered fondly by television viewers for the role of Samantha Stephens.

Tabitha, a Spin-Off series built around the now-grown daughter character (played by Lisa Hartman Black; Liberty Williams in the first pilot episode), was aired on ABC during the 1977-78 season, bringing supernatural comedy back to the small screen, at least for a while. Dr. Bombay, Abner Kravitz, and Gladys Kravitz's actors reprised their roles as guest stars here, but Samantha and Darrin did not appear as their actors declined.

Bewitched has been dubbed into dozens of languages for distribution all around the world. In addition, the series has been remade many times in foreign markets, most notably on Japanese TV in 2004 as Oku-sama wa majo

— literally, My Wife Is A Witch but subtitled in English Bewitched in Tokyo. Furthermore, Bewitched is credited as a major influence on the very first Magical Girl anime, Sally the Witch (Mahōtsukai Sally, broadcast 1966-1968), making it the ultimate ancestor of all Cute Witch characters in Japanese animation. More recently, explicit homage was paid to Bewitched by the anime Oku-sama wa Maho Shojo: Bewitched Agnes (2005). Finally, the rights to Bewitched have been owned since 1989 by Sony, a Japanese company; this is coincidental (it was a side effect of their purchase of Columbia Pictures), but certainly fits, given the series' popularity in Japan.