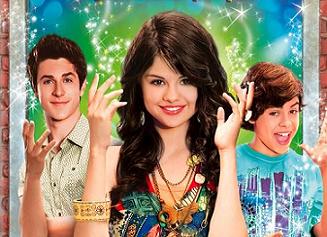 Wizards of Waverly Place (2007-2012) is an Emmy Award-winning Disney Channel sitcom about three siblings growing up in New York and dealing with the typical problems all teenagers go through. The catch? They're wizards. Shares some qualities with other shows and movies, but manages to distinguish itself with clever writing, and (in later seasons) a strong focus on continuity. Hijinks ensue as Alex (Selena Gomez), Justin (David Henrie) and Max Russo (Jake T. Austin) try to deal with being wizards while not exposing magic to the normal world.

The show finished airing its 4th season on January 6, 2012, and boasts a successful made-for-TV movie and two consecutive Emmy wins. This is one of only six times Disney has ordered a 4th season of one of their live-action shows, the others being That's So Raven, Hannah Montana, Good Luck Charlie, Austin & Ally and JESSIE. It is also their longest running live-action series with 106 episodes by production order - only Phineas and Ferb, which runs episodes in an 11-minute format (and ran three more years, from 2007-2015), has more on the network.

The Movie (simply titled Wizards of Waverly Place: The Movie) concerned the Russo family spending their vacation in the Caribbean; Alex makes a wish that goes awry due to magic and she must team up with her siblings to reverse the effects. Wizards also participated in a Massive Crossover Event titled Wizards On Deck with Hannah Montana.

The series finale aired on January 6th, 2012 with the Family Wizard Competition that will decide which of the three siblings will become the family wizard.

A one-hour TV special called The Wizards Return: Alex vs. Alex, reuniting the main cast of the show, was broadcasted in March 2013. Selena Gomez not only returned to her Wizards role, but was also an executive producer of the movie. David Henrie did not reprise his role, citing various reasons.

Mason: No surprise. You all know I did not like him.

Max: I'm blaming the closest person to me. It's how this family works.

Justin tries to use the mind trick on two wizard government officials.

Justin tries to use the mind trick on two wizard government officials.