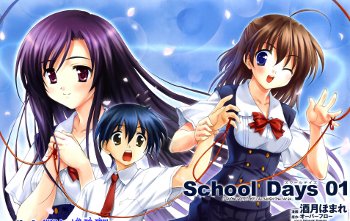 Now available in a three way version, for when one destined love interest just isn't enough.
"Take the guesswork out of love."
— TiMER
Advertisement:

More than Love at First Sight, more than simply two Soulmates destined to be together, the Red String of Fate is some perceptible clue that identifies your destined One True Love.

The trope namer is an East Asian belief originating from Chinese Mythology called yīnyuán hóngxiàn also known as the Red String of Fate or Red Thread of Marriage. Frequently found in Japanese works, where it's referred to as akai ito or unmei no akai ito. The concept is that two people who are destined to be together are attached by an invisible red string tied by Yuè Xià Lǎorén, the old lunar matchmaker god. In the Chinese mythos, the string is tied around both parties' ankles. In the Japanese mythos, it's traditionally bound from a male's thumb to a female's pinky finger, but it's more common these days to show both parties attached at the pinky.

The Red String of Fate need not be a literal red string. It could be a timer counting down to alert you at the exact moment that you meet the perfect person for you. It could even be an unusually meaningful birthmark showing your destined’s name in their own handwriting. Whether magic or Magitek, whether you’re born with it or have to have it installed, whether it actively pulls you together or serves only as a passive identifier, the match it suggests for you is your True Love Because Destiny Says So.

In poorly-done examples, may be Strangled by the Red String. May be related to the Pinky Swear. Usually involved in Reincarnation Romance. See also Fate Drives Us Together and Forgotten First Meeting. Compare Love Before First Sight and Mindlink Mates. Soulmate AU Fics use a form of this. Has nothing at all to do with String-on-Finger Reminder, which is about a character tying a string around their finger to help them remember something important.