Manga / The Miko's Words and the Witch's Incantations 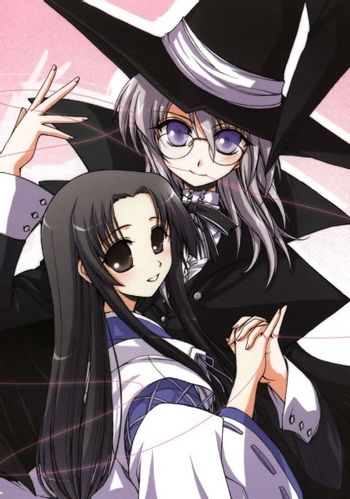 From the writer who brought you Iono the Fanatics, it's The Miko's Words and the Witch's Incantations AKA The Caged Miko and the Whimsical Witch (Kotonoha no Miko to Kotodama no Mahou) 『ことのはの巫女とことだまの魔女と』. It ran from 2005 to 2006, originally being published in Yuri Shimai before moving to that magazine's successor, Comic Yuri Hime.

Slightly egotistical but certainly not evil Witch Letty (or Reti) is visiting Japan; because in her words, she's an "architecture buff." This hobby has led her into investigating a shrine off in the middle of nowhere; which actually has a magical barrier preventing anyone from entering. Knowing a trick or two she sneaks inside and encounters....Tsumugi, the local Barrier Maiden Miko who gathers mana from the local mountain god for the government should it ever need it. But it's a task she must do ever alone since childhood.

Her sensibilities irritated that someone would just lock away another human being, Letty impetuously smashes the barrier and declares Tsumugi free. Tsumugi is flabbergasted, as she would have no idea what to do in the outside world that she has never known, and points out that if Letty is so adamant about this, she has to take her with her. And so they run off together into the night on Letty's broomstick.

What follows is Letty and Tsumugi getting to know each other more and more and finding out that they're attracted to each other. But other circumstances conspire that could keep them apart. Tsumugi was kept in the shrine of the Mountain God for more than one reason, and the family in charge of her is out looking for her....

Ultimately a fluffy story with a happy ending.

Alternative Title(s): The Caged Miko And The Whimsical Witch