Music / Poets of the Fall 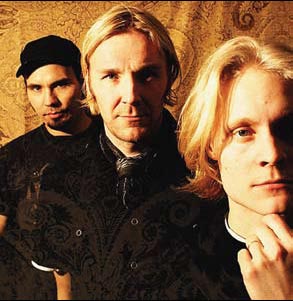 An Alternative Rock band from Finland, Poets of the Fall

Shortly after the band was formed in 2003, Sami Järvi aka Sam Lake, a friend of Saaresto’s and a scriptwriter working at Remedy Entertainment, asked him to turn a poem Järvi had written into a song for Max Payne 2; this would turn into "Late Goodbye", which serves as the game’s end credits theme and a recurring motif. Additionally, Kaarlonen had previously worked at a software company, which contacted them to use the song "Lift" in a benchmark program. Both of these helped expose the band to a wide audience. Their debut album, Signs of Life, entered the Finnish charts in the number-one spot and remained in the Top 40 for over a year.

They worked with Remedy again in 2010, on the video game Alan Wake. They appeared as the Fake Band Old Gods of Asgard, writing two songs specifically for the game. Additionally, they appeared as themselves in a flashback, and the song "War" was played on one of the in-game radios. They also have two songs in the Alan Wake Gaiden Game, Alan Wake's American Nightmare: "Balance Slays the Demon'' as the Old Gods of Asgard, and "The Happy Song" as themselves.

They have another two songs in Remedy's 2019 video game Control: One as themselves and one as the Old Gods. The latter, in typical Old Gods fashion, provides the soundtrack to one of the game's most memorable sequences.

To make matters worse, the opening verse notes he's aware that his attitude "should remind [him] of greed," but he twists the realization into Wishful Projection, hoping his listener shares his outlook.

And this is before the Scare Chord punctuated chorus, which is a blatant, direct demand to be loved, or his life will be ruined.