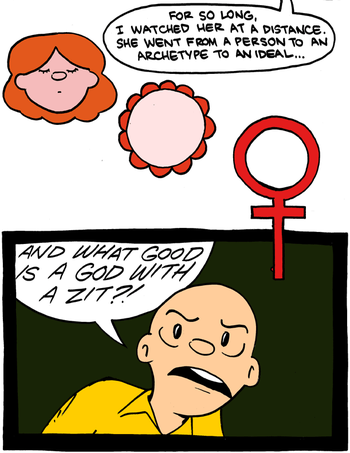 "Play me Chopin. He died before I could know him, and so he remains beautiful."
"Almost five years [he had pined for her]! There must have been moments even that afternoon when Daisy tumbled short of his dreams — not through her own fault but because of the colossal vitality of his illusion. It had gone beyond her, beyond everything. He had thrown himself into it with a creative passion, adding to it all the time, decking it out with every bright feather that drifted his way. No amount of fire or freshness can challenge what a man will store up in his ghostly heart."
— Nick about Gatsby and his flame for Daisy, The Great Gatsby
Advertisement:

The nature of emotional relationships often overlaps in confusing complications ranging from the simple crush to Freudian oddness. If this causes the writers to accidentally build things like harems, the easy way to get around this is to reveal the basal nature of a relationship. This is a form of Wishful Projection.

In the character's mind, one type of relationship was simply confused with another. This has some basis in reality, where some potentially romantic relationships are actually people seeking "figures". (Hell, who hasn't done this at some point?) They spend time with a person because he or she reminds them of someone else. For example, some characters attracted to older characters often have an absent parent or older sibling. This situation is often the inherent role of an Unwanted Harem's Unlucky Everydude.

In some other cases, it turns out that the character was only in love with the idea of being in love and applied it to the first suitable person they met; and in others, a character falls in love with another character… or more specifically, some defining feature of that character. For example, Bob falls in love with Alice because she is incredibly beautiful, or a brilliant fighter, or incredibly smart, but he fails to actually comprehend Alice beyond that trait. This is easy to do to The Lost Lenore since she's not around to contradict an idealized version of her.

Doing this poorly can feel incredibly cheap if the "explanation" doesn't make sense or potential evidence wasn't presented beforehand, as it feels as if the writers are just going down the list of romantic opposition and checking them off.

A sub-trope of Broken Pedestal, which is often what awaits anyone on the path of this trope.

Like Death of the Hypotenuse and Ron the Death Eater, this trope serves as a subtrope of Die for Our Ship in fanfic, to clear the way for the author's preferred ship.

If a character is Really 700 Years Old, this can keep the writers from having to deal with a Mayfly–December Romance.

The trope name refers to Éowyn's unrequited love for Aragorn from the Lord of the Rings trilogy, from the line "It is but a shadow and a thought that you love. I cannot give you what you seek."

Accordingly, compare and contrast with All Love Is Unrequited. Compare The Dulcinea Effect. Not to be confused with Fighting a Shadow.

See Post-Support Regret for the platonic version of this trope, though the two can overlap if the one who loved the shadow was an Only Friend who supported them and ignored all their wrongdoings, only to be proven wrong.

Most definitely can be Truth in Television.

In the heat of their fight, Ollie accuses Stan of Being "Hollow", saying that Stan had only ever cared about their studio-mandated partnership and never about him as a real friend.

In the heat of their fight, Ollie accuses Stan of Being "Hollow", saying that Stan had only ever cared about their studio-mandated partnership and never about him as a real friend.