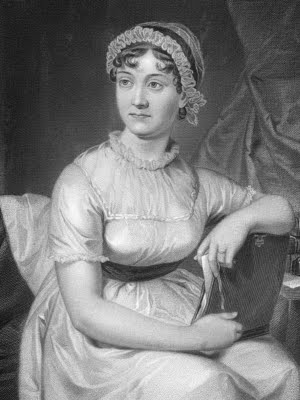 Jane Austen (16 December 1775 – 18 July 1817) was an English author who lived in the late 18th/early 19th century and wrote six novels between 1790 and 1817 before dying at the age of 41. Her books were published anonymously during her lifetime, but she is now one of the most famous authors in the English language.

Her novels are written with wit and frequent irony, and all follow a similar formula: gentlewoman sooner or later falls in love with man but can't marry him because he's engaged to someone else/he's in love with someone else/etc. Often there are cads to tempt her as well, but ultimately she ends up with the good guy who won't steal all her money or abandon her somewhere. There's far more variety among her heroines in terms of personality, though. She specialized in two types: Spirited Young Lady, the lively, witty, restless heroine who never fears to speak her mind (Elizabeth Bennet, Marianne Dashwood, Emma Woodhouse); and the quiet, Stoic Woobie who rarely if ever speaks her mind since everyone misjudges her anyway (Elinor Dashwood, Fanny Price, Anne Elliot).

Despite being nominally romance novels, and writing in a period that overlapped with Romanticism, Austen's works are not classified as Romantic-with-a-capital-R. Austen strikes a balance between Romanticism and Enlightenment: her happy endings are born of social harmony as well as warmth of feeling.

Austen is well-known for her wit, satire, and proto-feminism; serious critics consider her to be the equal of Cervantes, Milton, and Shakespeare. Virginia Woolf called her the first truly great female author, and the first good English author to have a distinctly feminine writing style. Rex Stout considered her the greatest English writer ever—yes, even above Shakespeare. Heady praise from a man who claimed to have previously believed that men did everything better than women.

Unfortunately, little of her personal correspondence survives (of the 3,000 letters she wrote, about 161 still exist). Her sister Cassandra burned most of it and redacted segments of what she didn't burn, evidently out of concern that Jane's privately-expressed opinions of certain family and friends would cause a great deal of posthumous drama. The popularity of her novels in the following decades resulted in further redactions by her relatives, who wanted to present a public image of the good and proper maiden aunt instead of whatever messier and more complicated details might be expected of any person.

Jane Austen also has the distinction of being one of the few classic authors beloved by both the academy (her novels are a popular choice for School Study Media) and popular culture, thanks to the devoted Austen fan community who call themselves "Janeites." Her novels are also frequently adapted into films, especially Pride and Prejudice and Emma (which was also the inspiration for Clueless).

The novels, in order of publication:

Persuasion was published posthumously by her brother in a volume along with Northanger Abbey, although the latter was actually the first she completed (Jane herself often wondered why its initial publisher paid for the book and then didn't publish it). There's also lots of juvenalia that she probably didn't expect anyone to read (outside her closest family), let alone publish, and two unfinished novels called The Watsons, which she abandoned in the wake of her father's death, and Sanditon, left unfinished by her own death.

Works by Jane Austen (other than those with their own page) contain examples of: